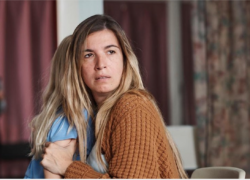 The film Listen, directed by Ana Rocha de Sousa, will be the Portuguese candidate for Best Foreign Film at the 2021 Oscars, the Portuguese Academy of Cinema (APC) announced.

The film was the most voted production among the members of the Portuguese Academy of Cinema (APC) to represent Portugal at the 93rd American Film Academy Awards.

The President of APC, Paulo Trancoso, said that “This reveals a vote of hope in the talent of Portuguese filmmakers who are becoming increasingly recognized across borders.”

The 93rd Academy Awards, postponed for a couple of months due to the pandemic, will take place on the 25 April 2021, at the Dolby Theater, in Los Angeles, during which Academy will award 23 categories.

Recently, Listen won the Future Lion Award at the 77th Venice International Film Festival and was acknowledged with a special Orizzonti jury prize. It was also distinguished with the Bisato d’Oro Award for Best Performance, one of the parallel awards at the 77th edition of the Venice Film Festival, in Italy. The film also won the Sorriso Diverso Venezia Award.

Based on a true story, Listen is about Portuguese couple struggling to make ends meet, when a misunderstanding arises at school with their deaf daughter and the British social services.

The narrative portrays the battle of the Portuguese immigrant parents to keep their family together.

The production was filmed on the outskirts of London with a Portuguese and English cast, led by Lúcia Moniz, Ruben Garcia and Sophia Myles.

The shortlist of the top 10 Oscars nominees by the 93rd Academy Awards will be revealed on February 9, 2021.

Ana Rocha de Sousa, 42, is also a stage actress. She completed a degree in Fine Arts in Portugal before emigrating to London, where she studied cinema with Mike Leigh and completed a Master’s Degree in Directing at the London Film School.

653shares
Share this ArticleLike this article? Email it to a friend!
Email sent!