Opinion| Will Brazil lead the fight against global warming?  – By Len Port 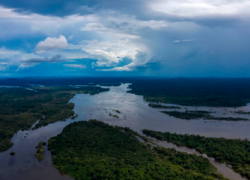 Brazilians in Portugal, the largest expatriate population here, may still have mixed feelings about the narrow victory in the presidential election back home, but Portuguese Prime Minister António Costa and most of the delegates now in Egypt for the United Nations COP 27 climate summit are pleased at the outcome.

President-elect Luiz Inácio Lula da Silva, popularly known as Lula, has promised to help save the Amazon rainforest, which the far-right incumbent President Jair Bolsonaro has allowed to badly deteriorate. Almost a million square kilometres of the rainforest have gone. That’s about a fifth of its original forested area.

Apart from providing home to a vast number of different species of life, the trees of the Amazon help stabilise the climate by releasing 20 billion tonnes of water into the atmosphere each day. This plays a key role in carbon and oxygen cycles.

Brazil has an outsized influence on the climate in that degradation of the rainforest means that it is liable to release huge amounts of carbon dioxide, the primary greenhouse gas emitted. The Amazon stores enough carbon, which, if fully released, would be equivalent to an estimated 730 billion metric tonnes of carbon dioxide. That’s enough to account for 20-years of global emissions at current rates.

“Brazil is ready to resume its leading role in the fight against the climate crisis, protecting all our biodiversity, especially the Amazon forest,” the centre-left Lula, has said.

Bloomberg Green, a leading journalistic outlet on climate change, notes that Bolsonaro has significantly undermined environmental regulations and accelerated the destruction of the Amazon in large part by allowing illegal deforestation for cattle ranching, mining and other business purposes. Greenhouse gas emissions have risen in tandem.

It remains to be seen what Lula will be able to accomplish when he officially takes up the presidency on 1st January, but climate advocates certainly see his election as a move in a better direction.

If the planet gets too hot, the world largest rainforest in the Amazon will be an extraordinary tipping point, vulnerable to unstoppable conversion from forest to savannah through a process called ‘dieback’, ‘according to a recent paper in the journal Science.

Accelerated deforestation could trigger sooner rather than later a tipping point that releases countless and calamitous quantities of that stored carbon.

Lula is about to update his country’s intended contribution to the formal climate pledges made during the landmark COP 21 Paris Agreement signed by 196 countries in 2015.

President Joe Biden and 17 other top-level United States officials are attending COP 27, a clear indication that the world’s biggest greenhouse gas emitter is going to do more this time than simply make pledges it fails to honour.

United Nations Secretary-General and former Portuguese Prime Minister, António Guterres, has said that rich nations must sign an “historic pact” with poor countries over the consequences of global warming or “we will be doomed”.

Meanwhile, this week, the 40,000 heads of state, government ministers, executives, scientists and activists in deep discussions in Sharm El Sheik, Egypt, will be engulfed in feelings ranging all the way from fatalism to guarded optimism.