Opinion: Really? Are you being fed too much bad news? – By Len Port

A Times columnist recently pointed out that compared with any period in the past half century, the world as a whole is “healthier, wealthier, happier, cleverer, cleaner, kinder, freer, safer, more peaceful and more equal.”

Newspapers, television, radio and online news services provide an unrelenting torrent of negativity. There is never any shortage of bad news but, blimey, hasn’t there been a surfeit of it lately!

Even at the best of times, bad news stories far outnumber and are given far more prominence than the good ones. As if that were not bad enough, far from “telling it like it is,” journalists nowadays often feel the need to add spice, distort, exaggerate and emotionalize in order to make the news sound even worse.

Hacks nowadays are under pressure to ratchet things up amid a multiplying profusion of competitors all covering the same stories.

Taking more notice of the bad than the good is a natural trait we humans have been stuck with since the Stone Age when we needed to quickly identify trouble in order to avoid it and survive.

But bad news can be toxic. Like a drug, it can become addictive. Psychologists say that regular doses can harm our mental health.

In Portugal, for example, a daily injection of gloomy economic news has been difficult to avoid in recent years. For many people it’s hard enough struggling to cope with the basic practicalities of austerity without the media rubbing it in and provoking feelings of pessimism, fearfulness, anxiety and anger. 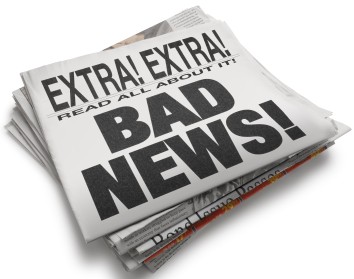 Terrorist atrocities raging in the Middle East, a new ‘Cold War’ fermenting in Ukraine, pedophilia rampant in the UK, Ebola out of control in West Africa, climate change threatening the whole damn planet. There’s no let-up. The subjects and the locations change, but the overall picture remains bleak. That said, it’s not entirely hopeless.

The death toll in Syria’s three-year civil war has climbed past 160,000. More than a million were killed in the Vietnam War and 55 million in World War II.

The number of Ebola deaths is still measured in the low thousands and although the dangers of it multiplying exponentially should not be underestimated, it’s worth remembering that in 2012 about 1.6 million people died from AIDS, 1.3 million from tuberculosis and 627,000 from malaria. The good news is that the overall number of people dying annually from infectious diseases has been dropping dramatically.

It seems like only yesterday that we had all that media malarkey about the Y2K millennium bug that was going to end life as we know it by sparking a catastrophic meltdown in computer systems. Pity it didn’t, some might say, given the spiraling abuse and hate on social media.

A couple of centuries ago – 21 October 1805 to be exact – the British defeated the Spanish at the Battle of Trafalgar. The mighty victory was somewhat overshadowed by the fact that Lord Nelson was shot and killed in the battle. It took a fortnight to get the news to London.

Today, such an event would be transmitted around the entire globe in minutes. It might even be broadcast on TV live.

And don’t tell me you wouldn’t watch it.