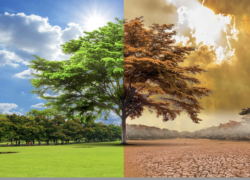 Amid the wildfires and droughts in Portugal and across the European continent, there has been no sign of a return to China’s co-operation agreement with the United States in combating global warming.

The wildfires and droughts exemplify the ever-present danger of climate change, but the surprising breakdown of the agreement signed by China and the US last year has raised more alarm about saving our planet.

The collapse of their co-operation seems rather petty as it was apparently caused by the brief visit by the US politician Nancy Pelosi to Taiwan, which China claims as a province of its own overall territory.

Climate scholars say there is little chance of averting calamitous heat increases without China and the US working together.

Growing tensions between the superpowers has made them increasingly distrustful and thus made it more difficult for non-political scientists to share climate research information across borders.

The latest clash between China and the US occurred just as the American Senate, after much wrangling, was on the brink of passing a package of legislation that included more than $300 billion in climate investments.  The unprecedented proposals have now passed through Congress and are expected to be signed into law this week.

Elsewhere, however, major governments are dithering and still not doing enough to limit warming to 1.5C.

China and the US agreed to boost co-operation for the rest of this decade in a joint declaration during the COP 26 conference organised by the United Nations in Glasgow last November. That commitment was made with delegates from almost 200 countries present. It was perceived as a very positive achievement in an otherwise disappointing conference. Much hangs in the balance for COP 27 in Sharm el-Sheikh, Egypt, from 6th to 18th November.

Meanwhile the Reuters news agency has firmly scheduled an “impact” discussion aimed at mobilizing businesses to deliver on climate action. More than 300 top executives and government officials will take part in the event in London on 3rd and 4th October.

No one cares more about advancing action on this subject than the young who have most to fear. The European Court of Human Rights is expected to rule this autumn on the claim by a group of six young Portuguese citizens that the climate protection policies of 32 European countries are inadequate. This legal clash has been building for five years, but has now been referred to the grand chamber of the court where it will be considered by 17 judges.

The Portuguese group have taken on this legal battle because they say the climate crisis interferes with their right to life, their right to respect for their private and family lives, and their right not to be discriminated against.

The six Portuguese claimants are represented by 10 barristers from various UK chambers. The 32 defendant countries include France, Germany, the UK, Spain – and Portugal.
——————