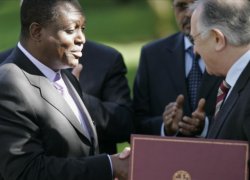 A corruption trial against jailed former prosecutor Orlando Figueira that started on January 22 in Lisbon, Portugal, has deep international ramifications. The man accused of bribing Figueira to quash a 2013 investigation into the source of funds for acquiring private luxury residences in Portugal is Manuel Vicente, a former vice president of Angola and long-time head of Sonangol, Angola’s national oil company.

Despite previous vows by Portuguese top judiciary officials not to yield to political pressure, the Portuguese courts allowed the accusations against Vicente to be separated from those against Figueira. This decision came after Portuguese Prime Minister Antonio Costa met at the World Economic Forum in Davos, Switzerland, with Angola’s new president João Lourenço. The court case was likely on the agenda for their private talks.

Angola has long argued that Vicente should face justice at home instead of in Portugal because of a judiciary agreement among the Community of Portuguese Speaking Countries. But former Angolan President José Eduardo dos Santos made sure an amnesty law against legal proceedings was in place to shelter himself, his family and his close associates before he stepped down last August after 38 years of iron-fisted rule. That law also applies to Vicente.

President Lourenço and other Angolan politicians have called corruption cases in Portugal against Angolan elites a form of “neo-colonialism” and have threatened economic sanctions against Portugal. Angola is a former colony of Portugal. Many of its oil-rich citizens have invested billions of dollars in Portuguese energy, media, banking and real estate companies. Portugal risked a diplomatic row and a notable economic impact, so it bowed to impunity once again.

Vicente has been a central figure in Angolan power circles for decades. Born in 1956, he was practically raised by Isabel Eduardo dos Santos, the eldest sister of former president dos Santos. The two Angolan statesmen grew up together and, in private, treat each other as cousins. Vicente for a long time was in fact expected to succeed dos Santos to the presidency.

Before being appointed Vice President in 2012, Vicente led Sonangol for 13 years. He was the architect of the company’s international expansion and many of its most lucrative deals. Under his guidance, Sonangol acted as the de facto Angola’s sovereign wealth fund and helped fuel Angolan politics and its economy for most of its post-civil war years. He currently serves as a deputy in the National Assembly, the Angolan unicameral legislative body.

According to the charges brought against Vicente by Portuguese prosecutors, he used $245,000 of Sonangol funds to buy a private luxury apartment in a leafy Lisbon beachfront district. When the purchase came under scrutiny by Portuguese investigators, he allegedly bribed Figueira with $810,000 to have the case closed.

Vicente’s business dealings have long been scrutinized and criticized. A 2012 International Monetary Fund report found unexplained discrepancies between the fees paid by foreign oil firms to Sonangol and the amounts that were transferred to Angola’s Petroleum and Finance Ministries.

That same year, the Financial Times revealed that Vicente and other senior Angolan officials held concealed stakes in an Angolan oil company that had partnered with a U.S. firm to drill in a lucrative oil field in Angola. Those stakes were eventually transferred to Sonangol, which was paid $1.8 billion when the U.S. partner exited. Vicente was not charged with wrongdoing, but he never revealed any more about his stake or how much it earned him other than acknowledging he held it.

Portugal, which has a reputation for laxity in enforcing financial crime, became known as “the laundromat” for its money-laundering history. The OECD singled out Portugal on just those grounds in 2013. In turn, Angola was ranked 164 out of 176 countries in the Corruption Perceptions Index produced annually by Transparency International.

Vicente’s ties to murky dealings also include Chinese companies and Russian oligarchs. For instance, The Economist linked him to the Queensway syndicate, an opaque consortium of companies that include China Sonangol. Vicente is a partner in these businesses founded by Sam Pa, a tycoon with alleged ties to Chinese intelligence services. Born Xu Jinghua, Sam Pa met dos Santos, the former Angolan president, when the latter was a student at a Soviet academy in Baku, Azerbaijan. As a result of these connections, Sonangol became the second largest source of oil imports to China after Saudi Aramco, netting billions of dollars for intermediaries like China Sonangol.

Vicente helped broker a long standing relationship between Sonangol and the Brazilian construction and petrochemicals conglomerate Oberbrecht Group. The Brazilians have been deeply involved in Angolan business and politics since the 1980s and Vicente was a significant shareholder in their joint business ventures, according to Portugal’s business newspaper Jornal de Negócios. The Oberbrecht Group has been at the center of the largest Brazilian corruption probe, dubbed Operation Car Wash, that engulfed major political and business figures in Latin America and elsewhere.

A detailed investigation by The Guardian showed: “Odebrecht had a department dedicated to bribes, known as the Division of Structured Operations, which laid out close to $800m in illicit pay-offs for more than 100 contracts in a dozen countries over 15 years.”

Oil and other mineral resources have flown out of Angola under the watchful eye of Vicente and a few others like him for decades. In a country struggling to overcome centuries of colonial plundering and decades of civil war, where 70 percent of the population survives on less then $2 per day, a small number of ruling elites have conducted business with little transparency, disclosure or accountability. Many billions of dollars have changed hands with no oversight or simply went missing into private bank accounts.

Given the serious charges and the pattern of actions shown by Vicente, the only way to obtain justice would be for him to stand trial in a neutral nation that has a reputation for rule-of-law. That way, those who have been harmed by Vicente can be assured he will be dealt with fairly and Angola can no longer claim that his trial was politically or racially motivated.

If Vicente, who denies any wrongdoing, is innocent of these charges, he should face them in a courtroom where justice is respected. The chances of that coming to fruition are slim, but that would be the best way for Angola, Portugal and for Vicente to find an honest resolution.