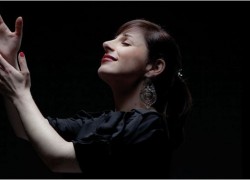 Portuguese Fado vocalist, Katia Guerreiro, was awarded the honor of “Chevalier” [Knight] of the French “l’Ordre des Arts et des Lettres” [the Order of Arts and Letters ] by the French Government. The bestowing ceremony will take place December 20.

Established in 1957, the Order of Arts and Letters Award recognizes individuals who have significantly contributed to the arts and literature and the enrichment of the French cultural heritage.

The order has three ranks:  Commandeur [Commander]; Officier [Officer]; and Chevalier [Knigh], the highest. The honor, not limited to French nationals, has included numerous foreign personalities.

Katia Guerreiro, 37, was born in South Africa to Portuguese parents. She was a child when her family resettled in the Azores where she discovered her passion for music and learned to play “Viola da Terra,” the Azorean traditional guitar.

After moving to Lisbon, mainland Portugal, to attend medical school, she was the founder and became the lead vocalist of her own rock band. After discovering her passion for Fado singing, her first album “Fado Maior” was released in 2001, becoming a silver album.

In France she has performed at the prestigious l’Olympia, the Trianon, the Le Ville Theater, the l’Ópera de Lyon, the National Theater of Bordeaux and the Reims Cathedral. She has also toured the country, performing in over 10 cities.