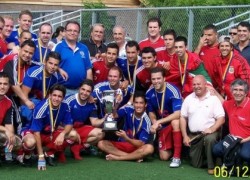 Indeed, hundreds of Portuguese gathered at Wilson Park on Sunday, June 12, to celebrate the weekend of  Portugal Independence Day, and to cheer the MPSC for their remarkable triumph after competing 30 years for the title.  The last time the Mineola Portuguese Soccer Club won the ENYSSA Manning Cup was in 1981,when Coach Jack DaFonte led the club to its last State Championship. 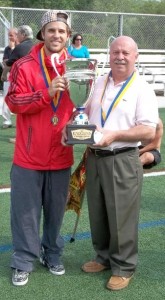 The club, which fields two division 1 teams, has seen incredible success this year, winning 30 games of 35 this season and scoring a total 110 goals so far with a 2.5 a game average.

According to a MPSC’s press release, in 2011 it was his son, Marco Dafonte, who along with team captain and VP George Spanos and VP Gabriel Marques, sought redemption for a state finals loss in 2009. They would face the 2010 National Amateur Champions and New York #1 ranked team NY Pancyprian-Freedoms in this year’s final.

The game opened with Captain Spanos leading by example, after making the score 1-0 early with a perfect penalty kick after the Pancyprians handled the ball in their own end. Later in the first half, striker Shane Arikian buried two laser shots to bring the score to 3-0 at the half. With nothing but wining on their minds, the Pancyprians attacked heavily to open the second half, taking shot after shot at the Mineola goal. Half-way through the second, Mineola would again score after a shallow angle shot by forward Andrew Herman. With their keeper now playing almost to mid field in a heavy push forward, the Pancyprians were able to score three consecutive goals in the final fifteen minutes to bring the score to 4-3. But their strategy would prove fatal in the last five minutes as a defensive clear for the Mineola Portuguese leaped over the head of the opposing goalkeeper at midfield and was quickly snatched up and booted by Herman for the fifth and final goal. 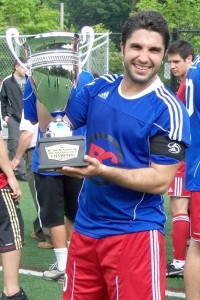 According to the MPSC’s statement “Watching his son lift the Manning Cup after the game brought tears to Jack’s eyes as his son had now followed in his footsteps, winning the most prestigious amateur soccer championship in the State. Spanos, who enjoyed the victory with his brother Frank (also on the team) was speechless after hoisting the trophy, saying that winning the cup was great, but winning it against the best team in the State made it ‘Special.’”

Afte the game, ENYSSA president Sal Rappaglia announced that he, inspired by the level of play of the Mineola Portuguese Soccer Club, had decided to send the team to the National Championships in Lancaster, PA on behalf of the Association, called the George F. Donnelly Cup, played on July 10th. George Spanos gladly accepted on behalf of the team.

Returning to Mineola only hours later, the team was swarmed with cheering Portuguese at the Mineola fair, erupting in cheer after the cup was presented to the community. The team was congratulated in person by New York State Senator Jack Martins, Village of Mineola Mayor Scott Strauss, Trustees Pereira and Durham, and received phone calls from Nassau County Comptroller George Maragos and Legislator Richard Nicolello.

The Portuguese Soccer Club is an amateur adult soccer club that was founded in 1936, officially registering with the Long Island Soccer-Futebol League (www.lisfl.org) in 1948. Mineola was the fifth club ever to win a championship in the then newly formed league, winning in 1954 and again in 1956. Since then, MPSC has developed over a dozen professional players and won more than 100 soccer tournaments and events, including 4 New York State Championships (1966, ’81,’85, ‘11) in its 75 year history. The MPSC is currently registered in the 1st Division with the Long island Soccer-Futebol League (LISFL), Eastern New York State Soccer Association (ENYSSA), and the United States Adult Soccer Association (USASA).