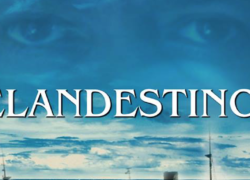 When he strides forward, you immediately notice his imposing figure:  tall with broad, powerful shoulders, sturdy hands, and a gravity in his inquiring gaze that draws you and the world ever closer for serious consideration.  A brown Fedora, Indiana Jones style, sits level on the head of this adventurous man who jumped ship 4 times before the age of 20, walked and hitch-hiked from Newfoundland to Montreal, with fifty cents in his pocket in the icy month of November, and dodged Canadian Immigration, American Border Patrol, and Portugal’s feared PIDE, the state security police under the Salazar dictatorship.  That’s only part of the story José da Conceição tells in “Clandestino.”

He was born near Lisbon in 1948, a few streets from the docks on Portugal’s Tagus River where as a young boy he decided his life would be a fabulous adventure. He was not mistaken.  His father, absent for six months each year on cod-fishing expeditions, would send post cards with drawings of far away places, sparking his son’s imagination and appetite for discovery.  American Far West movies and promises of riches further enhanced his dreams.  For most of his adult life he has lived, worked, and raised a family in the Montreal area.  He is the author of two volumes of popular poetry, Brumas da Memória-2003 and O Despertar da Saudade-2009.  More recently, José da Conceição has written “Clandestino,” a fascinating memoir-autobiography that spans the period from early youth to his arrival in Canada after Portugal’s Carnation Revolution.

“…Neste livro falo do amor pela vida que pulsa em cada ser humano, porque sei que vale a pena viver…”   (In this book, I talk about the love of life that throbs in every living person, because I know it is worth living…) 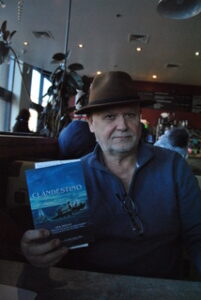 “Clandestino” is a unique and engaging narrative about a young man’s indomitable will to pursue his destiny.  It is a potent coming of age story from adolescence to adulthood with adventures spanning three continents, from the freezing waters and icebergs of the Sea of Labrador to the bush and tropical forests in Guinea-Bissau during Portugal’s colonial wars in Africa.  Defiance of the limitations imposed by authority is one of the recurring motifs in the book’s engaging episodes.  Young José refuses to wash the soiled underwear of White Fleet fishing captains, eventually abandons his ship in St. John’s, Newfoundland, and later disobeys a military superior in order to save a fellow soldier during an attack.

“I’ve always revolted against barriers that have limited my liberty,” the author explains with regards to his multiple attempts to jump ship.  “I had no money to discover the world.  How else could I do it?”   There is no vanity or self-aggrandizing in the portrait “Clandestino” offers of a boy from a modest background taking destiny into his own hands.  Highly accessible reading, it is a singular story of will, optimism, and courage joined to a heart-full message about surviving in the world.

Despite having received only a limited formal education, José da Conceição is passionately engaged in finding the right words to faithfully express the essence of his emotions and life experiences.  His writing reveals a refreshing charm and directness.

“What made you want to tell your story now?” I ask.

“I wanted my children and grandchildren to know who I am, where I came from, and what I’ve done.   Nostalgia provokes me to write.  Some memories are so strong that I am unable to resist trying to write about them.”   Luckily, he has recorded them for readers in “Clandestino.”

“While writing the book, it was painful to return to those years of living illegally, the fear and uncertainty, but for me, suffering has created these stories.  I’m proud of having written them down.”

I ask him about a poem in Brumas da Memória entitled Gronelândia.  After a brief pause and a long breath he recites the verse by heart in a richly timbered and musical voice.  He wrote it more than 50 years ago, at age 19, on the Aida Peixoto, a trawler cod fishing the Labrador Sea.  Gronelândia evokes a nearly sacred admiration of the natural world.  He comments on this power frequently, a source for him of solitary and primal connection, particularly in the overwhelming and often austere Canadian landscapes.  On that same voyage he would watch a fellow crewman yanked to his death by the mechanized cables that lower the fishing nets into the freezing waters.  Still engraved in his memory is the crew’s solemn procession to bury the young man among the graves of other Portuguese fishermen in the cemetery of a Greenland inlet village.  Several days later, José da Conceição would desert the Aida Peixoto in St. John’s, Newfoundland and begin his trek across Canada.

Another remarkable episode from Clandestino recounts his father abandoning his own ship in St. John’s and 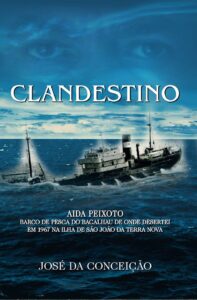 traveling to Montreal in search of his son who he has not heard from in four years.  The scene when father and son are reunited and celebrate tearfully over a sumptuous Portuguese meal creates a nearly biblical impression.

Twice a week, José da Conceição meets with a group of Portuguese friends in a Montreal café.  “To remain in contact with my culture and language,” he explains.  He writes articles for a local Portuguese newspaper and composes poems regularly.

Despite his youthful insistence on leaving Portugal and risking his life to succeed in America, he is profoundly attached to the country where he was born.

“Immigration cuts the relationship to your native country, but I always identify with being Portuguese.  There was no liberty under the Salazar regime, but that wasn’t why I left.  It was because I am an adventurer and wanted to see the world.  It is important for my children and grandchildren to know about their Portuguese heritage even if their first language is French.  You need to know where you come from.  How your blood is connected to a specific place.  I don’t understand people who completely forget their roots.”

He pulls a collection of papers from the inside pocket of his winter coat and reads the opening lines of Navegar, a recent poem:

This simple, popular verse that evokes youthful curiosity and a longing for other worlds could be the lyrics of a traditional folk song.  Rather, they are the carefully noted words of a seventy-two year old man pondering the sense of his life.

“It’s important for us to become the author of our own stories,” Jose da Conceição notes on the rear book-cover of Clandestino.  He admits to having a lucky star to guide him and the fortune to receive assistance from good people when necessary.  Clandestino describes a number of such encounters.  I ask him if he believes things happen by chance or because of a certain fate.

“We are born with specific destinies,” he answers.  “It’s up to each person to discover what that means.  I have tried to live my life fully.”  He pauses and fixes me with those serious yet generous eyes.  “I am still on the adventure of my life.  Still searching and asking questions.”

This interview first appeared in RTP Comunidades and is published here with the author’s permission. Clandestino (in Portuguese), by José da Conceição, is available at Voz de Portugal.

Richard Simas is a freelance writer with a background in literature and the performing arts, in particular contemporary music. He lives in Montreal and contributes regularly to contemporary arts and literary reviews. His work has been published in Europe and in North America, including Canada’s Journey Prize anthology and a winner of a Fiddlehead Fiction Prize. He is a frequent collaborator for Musicworks magazine in Toronto. He is the author of The Mystery of the Portuguese Waltzes, a book for children illustrated by Caroline Clarke.