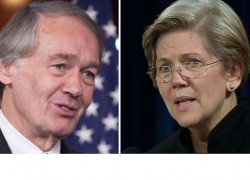 US Senator Edward J. Markey (D-MA) and US Senator Elizabeth Warren (D-MA), both described as leading figures in the Democratic Party, have co-signed a letter to President Barack Obama expressing their concern regarding the recent action by the US Department of Defense to withdraw 500 military personnel from Lajes Air Force Base on Terceira island, Azores, where 700 Portuguese civil workers are to lose their jobs.

In their letter, both Senators appeal to President Obama to take the appropriate actions to assist an ally during a difficult economic time.

The Massachusetts lawmakers also expressed concern about recent statements by Vasco Cordeiro, President of the Azores, regarding the effects of such reduction on the economy of Terceira island, from the phase out of Lajes Field as part of the consolidation of American forces in Europe.

Recently, a group of state legislators of Portuguese descent, members of the Massachusetts Portuguese American Legislative Caucus, had sent a letter to President Barack Obama expressing similar concerns, and petitioning President Obama to reassess the US Department of Defense policy to reduce the US military presence in the Lajes Air Force Base.

Referring to their effort, Senators Markey and Warren stated in their letter to President Obama, “We have heard from a group of our local elected official and members of the Portuguese American Legislative Caucus of the Commonwealth of Massachusetts who have expressed serious concerns about the impacts that these changes and potential future changes could have on the Azores.”

In their appeal to President Obama, Senator Markey and Senator Warren also reiterated that, while they both understand the needs of the Department of Defense to maximize the US military capabilities in Europe, they hope that the Administration would consider “other productive potential uses of the facilities at the Lajes Air Force Base to the benefit of the United States and the Azores.”

In their plea, the Massachusetts Portuguese American Legislative Caucus had also appealed to President Obama to take action on the matter by offering a better alternative plan for the Azores. “We hope you will take seriously our plea for a better alternative to this plan and that you would work with your cabinet to reach an arrangement that will better assist Portugal with the transition if resources are scaled back at Lajes,” they reiterated.

The letter was copied to US Secretary of Defense Ashton B. Carter, US Secretary of State John Kerry and members of the US House and Senate from Massachusetts, Connecticut, New Hampshire, Vermont, Rhode Island, Maine, California, Ohio and Texas.

In 2012, citing budgetary constraints, the US administration had informed the Portuguese government that it would significantly reduce its military presence at Lajes Field. On December 2014, the House of Representatives had requested a “specific evaluation” preventing the US Administration from reducing military personnel at Lajes Field pending the evaluation. However, on January 2015, the former United States Secretary of Defense, Chuck Hagel, affirmed the US decision to downsize the US presence in the Lajes Field on Terceira, Azores.

Lajes Field is home to about 650 U.S. military personnel and Defense Department civilians and the largest employer of Portuguese civil works on the island. The plan will withdraw about 400 military personnel and 500 family members from the base while many thousands of local Portuguese civil works will lose their jobs, significantly impacting the local economy.

Established in 1942 as a US military outpost, Lajes Field provides support to civil and military aircraft, including fighters from the US and 20 other allied nations. Its geographic position has made the US base on Terceira island strategically important to both the United States and NATO.

The Portuguese-American Legislative Caucus is a bipartisan group of Massachusetts legislators of Portuguese descent dedicated to strengthening the long-standing bilateral ties between the United States and Portugal and by raising the level of awareness regarding the issues facing the Portuguese American community.

___________
The Azores (population 250,000) is a region of Portugal composed of nine islands. The archipelago discovered by Portuguese explorers in the 15th century, became an Autonomous Region of Portugal in 1976. The government of the Autonomous Region of the Azores includes the Legislative Assembly, composed of 57 elected deputies, elected by universal suffrage for a four-year term; the Regional Government and Presidency, with parliamentary legitimacy, composed of a President, a Vice-President and seven Regional Secretaries responsible for the Regional Government executive operations. The Autonomous Region of the Azores is represented in the Council of Ministers of the Central Government by a representative appointed by the President of Portugal. Vasco Cordeiro, the leader of the Socialist Party (PS) in the Azores, was sworn Regional President of the Government of the Azores on October 14, 2012. According to the latest US census over 1.3 million individuals of Portuguese descent live in the United States, the majority with roots in the Azores. It is estimated that over 20,000 US citizens live in Portugal.