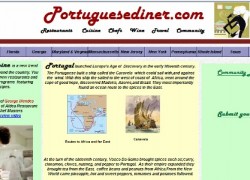 By Miguel Carvalho, Guest Editor (*) — For Maria Dias family traditions are important to keep and share. “Portuguese food is my passion,” she told the Portuguese American Journal. “It’s important that we share our family recipes, traditions and culture with the next generation,” she added.

Last year, when her daughter Lisa asked her to keep a journal online about family recipes, she decided to start “Tia Maria’s Blog”  a website about sharing Portuguese recipes with others interested in Portuguese food cooking. She also networks her Tia Maria’s Blog on Facebook.

She was right, there was an audience waiting for her idea. “I never thought I would get such a great response. I have about 3,000 visitors a month which is quite remarkable since I do not advertise. I’ve met lots of different people, had many invitations and great feedback from everyone,” she said.

Some of the invitations include television appearances. In February 2011, she co-hosted a show with Nate Luscombe, at WWLP 22 News channel, in Chicopee (MA), where she demonstrated how to prepare a tasty Portuguese spicy shrimp recipe. Watch next:

Maria also keeps Portuguese Diner a website which promotes Portuguese restaurants in the US, by listing them, state by state, with links to other Portuguese sites such as events, travel sites, wines, and articles of interest for the Portuguese American community. 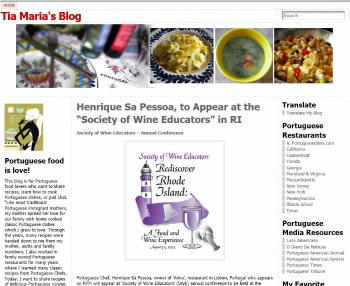 “When I travel, I’m always looking for great Portuguese restaurants. So, I’d love to keep adding more to the website which lists them by state. Eventually, I’m going to offer dining coupons from each restaurant to be printed directly off the website,” she said.

Following her entrepreneurial instinct, she was the creator of “Dogysheets” a product that has been advertised on television, at MSNBC and Telebrands, under the “As Seen on TV” category.

But to better understand Maria’s love for Portuguese cuisine and learn more about her entrepreneurial inclination, we have to go back in time and follow her story.

Maria’s family is from Trás-os-Montes, the northeastern region of mainland Portugal. Her parents were potato farmers who also ran a small bed & breakfast business. Before she was born, her family moved to nearby Braga city where they opened a restaurant.

Maria was six years old when her parents decided to move to the United States, in 1963, to provide a better life for their six children. The family settled in Ludlow (MA), a well-established Portuguese community, where Maria quickly learned English and adapted to the new culture.

Growing up in Ludlow was like living in a “Little Portugal.” Maria recalls, “My father Dinis became the president of the local Lusitano Club where he founded and managed a Rancho for a few years. All of my brothers and sisters were very involved in the community through owning businesses and even holding political office.”

Her mother Carmelina was a strong devoted woman who brought the family together around her cooking. Her greatest joy was having family celebrations which were centered on Portuguese food and traditions.

Maria remembers how her mother always had a pot of fresh soup on the stove — just in case someone stopped by — a tradition Maria still carries on. She said about her mother, “She was well known in town for her great ‘Folare’ and taught many people the recipe and technique. ‘Bolinhos de Bacalhau,’ a Christmas traditional recipe, was also a favorite of hers that our family always longed for.”

Other source of inspiration for cooking came from her godmother Alzira who had been a personal chef to a high ranking Portuguese military. “Every Christmas, I was sent to her house to help her prepare her famous ‘Rissóis de Camarão’ — a recipe that I carry on for my own family today,” she said.

Many of Maria’s relatives were also distinguished cooks and restaurateurs. In the 60’s, when one of Maria’s aunts ran a restaurant in Belém, one of Lisbon’s historic quarters, Maria’s two older brothers went there to work and learn how to cook.

Years later, her brothers would open a Portuguese restaurant, “The Matador,” in Ludlow (MA), which they ran for over 12 years. “At Christmas time, customers would come from all over New England to order their famous ‘Bolinhos de Bacalhau”’ — Maria said.

Maria and her husband, Augie, also ran their own Deli-cafe for many years. “I made thousands of homemade soups at the Deli using my own and my mother’s recipes,” she said.

From there, she became a manager cook at Gourmet Cafe & Deli. She also became a retail sales manager at her brothers’ “Silva Real Estate Services.”

Most recently, Maria Dias decided to put her entrepreneurial skills to work on a new venture. She created “Dogysheets” or cotton sheets for pet beds.

It all started when she noticed that her dog Miles was very sensitive to hot and cold weather. She noticed he would rather sleep on the hard wood floor than on his bed.  “I realized the reason was because his bed was too hot. So I decided to make him a cool cotton sheet for his bed. He loved it so much that he took a three hour nap, in his bed, that same day! At that moment I thought that maybe other dogs would love the sheets too,” she said.

That’s how ‘Dogysheets’ were invented. She then contacted a manufacturer and did her own marketing through her newly created website .

In December of 2010, Maria decided to submit her ‘Dogysheets’ to “Your Business” a MSNBC show on television. After an appearance at MSNBC, her ‘Dogysheets’ become featured at  As Seen on TV.com .

She was invited to tape an interview at their studio at the 30 Rock headquarters, in New York City, on February 17, 2011. She said with excitement, “I was in the Green Room to have my hair and make-up done. It was a challenge — the experience of a life time that I’ll never forget.” (Watch the interview here).

About her tips on how to get a product featured by “As Seen on TV.com”  her advice is: “Anyone can pitch an idea to Telebrands on their website. Just be sure it’s patented. It has to be a product that solves an everyday problem. It needs to sell for less than $20. And it has to be marketable on TV” — she said.

It worked for her. She is glad she tried. “It was a one in million shot!…” she said.  She is keeping her fingers crossed that “the American Dream of entrepreneurial success will come true” for her, she wished.

Maria lives in Massachusetts with her husband and their adult children. She is always looking for new ideas, new recipes, articles, and links to share. Pay her a visit and you will be impressed.

(*) Miguel Carvalho is a Strategic International Public Relations specialist with broad experience in creating integrated marketing communication plans into the travel industry.  He is based in New York where he lives with his family in Tarrytown. In his spare time he enjoys reading, traveling, cooking, writing and photography.  His interests are related to marketing, social networking, branding, strategic communications and entrepreneurship.