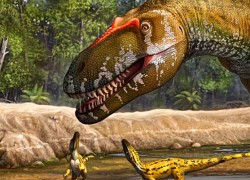 Two paleontologists in Portugal, Christophe Hendrickx and Octávio Mateus, from Universidade Nova de Lisboa, have identified a new species of carnivorous dinosaur from 150 million years ago.

In a joint study, the two scientists concluded that the fossils of a dinosaur preserved in the Lourinhã Museum, in Portugal, which were thought to belong to the Torvosaurus Tanneri species, are actually a Torvosaurus Gurneyi, a new species they named in an article  published in PLoS ONE  an open-access scientific journal.

“This is not the largest predatory dinosaur we know,” said co-auhtor Christophe Hendrickx. The Torvosaurus Gurneyi is named in honor of the paleoartist James Gurney – creator of the utopic world of Dinotopia.

The new finding is the largest land predator known from Europe and one of the biggest predatory dinosaurs from the Jurassic period. Fossil evidences of closely related dinosaurs suggest that this Torvosaurus Gurneyi may have already been covered with proto-feathers.

“There are anatomical differences, namely in the jaw, which has quite different plates between the teeth. The ‘Torvosaurus Tanneri was only known to live in North America and had 11 teeth on each side of the jaw, while this species has nine,” said Octávio Mateus.

The newly identified dinosaur had a skull of 115 cm, grew to 10 meters in length and weighed about five tons, making it the largest predator of the Upper Jurassic period. The number of teeth, as well as size and shape of the mouth, may differentiate the European and the American Torvosaurus.

The paleontologist also concluded that 150 million years ago the Torvosaurus Gurneyi species were geographically isolated as the Atlantic spread between the American and European continents. Recently described dinosaur embryos from Portugal are also ascribed to this new Torvosaurus species.

Portugal is very productive in Late Jurassic paleontological findings. The Lourinhã Museum has a rich paleontological collection, particularly of Late Jurassic dinosaurs known as the “Lourinhã Formation” (Kimmeridgian-Tithonian) which include specimens such as the stegosaur Miragaia longicollum, theropod Lourinhanosaurus antunesi, sauropod Dinheirosauruslourinhanensis, ornithopod Draconyx loureiroi, theropod Allosaurus europaeus, and, a mammal, Kuehneodon hahni. Other relevant dinosaur specimens at the museum include nest and eggs and embryos of Lourinhanosaurus.

The ancient town of Lourinhã (population 23,000) is located on the west cost of Portugal about 60 km north of Lisbon. The name Lourinhã has been associated with the Roman settlement in the Iberian Peninsula occurred in 219 BC.