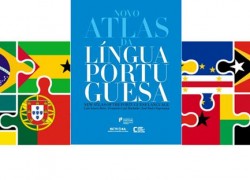 According to the New Atlas of the Portuguese Language [Novo Atlas da Língua Portuguesa], published in Lisbon this week, in 2100 the Portuguese language is projected to be spoken globally by 400 million.

Published in a Portuguese-English edition, by the Instituto Universitário de Lisboa (ISCTE), the book was presented in Lisbon this week in a ceremony presided by the Portuguese Minister of Foreign Affairs Augusto Santos Silva.

The publication, cosponsored by the Camões Institute and the Ministry of Foreign Affairs, was co-authored by Luís Antero, Rector of the ISCTE, and faculty members Fernando Luís Machado and José Paulo Esperança.

Researched based, the edition presents updated information relating to Portuguese as a global language spoken by 263 million (2015) in Europe, South America, Africa and Asia. According to the book, in 2050 Portuguese will be spoken by an estimated 390 million and in 2100 by a projected 400 million.

Currently, Portuguese is the third most widely spoken European language, after English and Spanish. More people around the world speak Portuguese as their native language than French, German, Italian or Japanese.

A motion was approved recently to add Portuguese as the 7th official language of the United Nations in addition to Arabic, Chinese, English, French, Russian, Spanish.  The motion was presented early this month at the Community of Portuguese Speaking Countries summit staged in Brasilia (Brazil), with the participation of leaders from the eight CPLP countries where Portuguese is the official language. The motion was supported by António Guterres, the newly elected United Nations Secretary-General starting January 1,  2017. May 5th is the International Day of the Portuguese Language and Culture.

(*) Carolina Matos, is the founder and editor of the Portuguese American Journal online. She was the editor–in-chief of The Portuguese American Journal, in print, from 1985 to 1995. From 1995 to 2010, she was a consultant for Lisbon based Luso-American Development Foundation (FLAD). She graduated with a Bachelor’s Degree in Liberal Arts and a Master’s Degree in English and Education from Brown University and holds a Doctorate in Education from Lesley University. She has been an adjunct professor at Lesley University where she has taught undergraduate and graduate courses. In 2004, Carolina Matos was honored with the Comenda da Ordem do Infante D. Henrique, presented by Jorge Sampaio, President of Portugal.