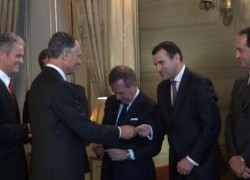 The Conselho da Diáspora Portuguesa [Portuguese Diaspora Council], presided by the President of Portugal, Aníbal Cavaco Silva, was officially created in Lisbon in an effort to promote Portugal’s reputation abroad.

The main goal for the 24 founding members is to form a network of 300 elite Portuguese entrepeneurs doing business internationally.

The new council will promote areas of national interest such as the economy, citizenship, the arts and sciences.

Council members will act as “ambassadors” of good will for the country and will reach for the Portuguese immigrant communities abroad to use their knowledge and support to “improve” Portugal’s image abroad, said Cavaco Silva.

“I strongly believe in the potential of Portuguese communities abroad (…) I have the feeling that today we are planting a tree that will give good fruits to Portugal,” said President Cavaco Silva.

According to Filipe de Botton, council’s chairperson, the main goal for the new organization is to lobby abroad to promote the image and credibility of Portugal around the world.

An estimated 5 million Portuguese nationals reside abroad, of which 1.3 million are of Portuguese descent in the in the United States.