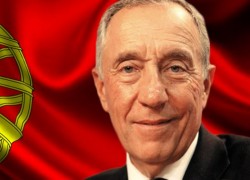 Marcelo Rebelo de Sousa, 67, was inaugurated as the 20th President of the Portuguese Republic. He swore to uphold the Portuguese Constitution in a ceremony at Parliament today, March 9, 2016.

He succeeds Aníbal Cavaco Silva, 76, who served as conservative prime minister from 1985 to 1995 and for two consecutive terms as president from 2006. Unlike his predecessor, he has not held a top state position.

Considered a moderate, he is a former leader of the center-right Social Democratic Party (PSD) in opposition to the ruling Socialist Party (PS). A career politician, he has been a government minister, a professor of law, a journalist, an author and a prominent political pundit.

He promised to restore political divisions and contribute to ameliorate the unpopular national hardship caused by austerity measures resulting from Portugal’s €78 billion ($85.5 billion) bailout in 2011.

“We have to be loyal to the commitments we have adopted, especially the ones that are part of our foreign policy, such as the European Union,” Rebelo de Sousa told parliament as was been sworn in.”Without rigor and financial transparency the risk of returning to crises is painfully larger,” he warned.

Although the office of President of Portugal is limited mostly to symbolic ceremonial duties, he plays an important role at times of political uncertainty.

President Marcelo Rebelo de Sousa, who won presidential election with 52% of the vote in January 24, takes over at a time of growing pressure on the government to cut spending further to meet budget goals.