Lecture: Richard Zenith to present the work of Fernando Pessoa – Library of Congress 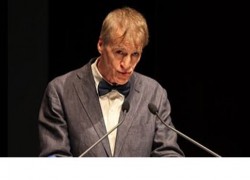 The pavilion is located on the ground floor of the Thomas Jefferson Building, 10 First Street, S.E., Washington, D.C. The event is free and open to the public. A display of works by and about Pessoa will be on view in the Great Hall’s South Pavilion in the Thomas Jefferson building March 4 – 30.

Cosponsoring the program is the Library’s Poetry and Literature Center, in collaboration with the Secretary of State for Culture of Portugal, the Embassy of Portugal and the Caixa Geral de Depósitos of Portugal.

Born in Lisbon and raised in Durban, South Africa, Fernando Pessoa (1888-1935) was one of Portugal’s most important literary figures of the 20th century and a towering figure in modernism. He produced a rich body of work, and his poetry and essays were influenced by English-literature writers W.B. Yeats, Ezra Pound and T.S. Eliot. Pessoa’s numerous pen-names include Alberto Caeiro, Álvaro de Campos and Ricardo Reis (he created approximately 75 pen-names throughout his life). Some of his most important works include “Mensagem” (“Message”) written in 1934, “O guardador de rebanhos” (“The Keeper of Sheep”) written in 1914 and “O livro do desassossego” (“The Book of Disquiet”) in 1982. He was also an essayist, a literary critic, a translator, a publisher and a philosopher.

Richard Zenith, born in Washington, D.C. and a graduate of the University of Virginia, is a world-renowned specialist on Fernando Pessoa. He’s translated many of Pessoa’s works along with works by other Portuguese and Brazilian writers. His honors include a fellowship from the Guggenheim Foundation, the PEN Award for Poetry in Translation, the Harold Morton Landon Translation Award and the Prémio Pessoa.

The Library of Congress, the nation’s oldest federal cultural institution, is the world’s preeminent reservoir of knowledge, providing unparalleled collections and integrated resources to Congress and the American people. Many of the Library’s rich resources and treasures may also be accessed through the Library’s website, www.loc.gov.