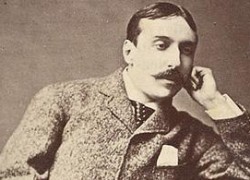 The University of Massachusetts Dartmouth Center for Portuguese Studies and Culture, the MA & PhD Program in Luso-Afro-Brazilian Studies and Theory, and the Department of Portuguese announce a lecture, “Progress and Scientific Idealism in Eça de Queirós (A cidade e as serras) and Julio Verne (Les tribulations d’un chinois en Chine)” by Prof. Sérgio Paulo Guimarães de Sousa from the University of Minho, Portugal.

In his novel A cidade e as serras (1901), Eça de Queirós introduces a peculiar protagonist who makes an equally peculiar life-changing decision. Jacinto, a Portuguese millionaire living in Paris, leads a tedious existence despite being surrounded by everything that the latest technologies of his time could provide. Quite unexpectedly, Jacinto decides to leave Paris and all of his gadgets behind for simple country life in Portugal.

Although this celebrated character has been extensively studied by scholars, to date he has not been discussed in parallel with Jules Verne’s Kin-fo, the Chinese millionaire who is the protagonist of Les tribulations d’un chinois en Chine (1879). In comparing Jacinto and Kin-fo, a number of important coincidences emerge, such as their shared passion for technologies and a Schopenhauerian tedium they both experience. Given these parallels, it is possible to postulate that Verne’s earlier novel might have influenced Queirós when he was writing A Cidade e as Serras.

The lecture, free and open to the public, will take place on Thursday, November 7, at 5:00 p.m., in the Prince Henry Society Reading Room at the Ferreira-Mendes Portuguese-American Archives, parking lot 13. The lecture will be in Portuguese.