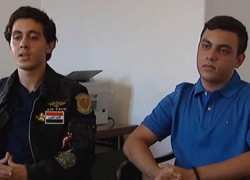 The victim suffered a fractured skull and other severe injuries which left him in a coma for several days.

The injuries apparently resulted of a fight outside a bar in Ponte de Sor, about 110 miles northeast of Lisbon.  He was airlifted to the Hospital of Santa Maria in Lisbon where he left the intensive care on Tuesday.

He suffered multiple fractures and serious head injuries and has reportedly undergone reconstructive surgery to his face as a result of the assault. The incident has brought a public outcry.

Following the arrest of the two suspects, Haider and Ali Ridha, 17, were questioned by the police and released from jail on Thursday under diplomatic immunity.

Because both suspects hold diplomatic passports, Portuguese authorities are seeking to lift the diplomatic immunity to prevent them from leaving Portugal if prosecutors decide to bring charges.

Portuguese Foreign Minister Augusto Santos Silva said the case is extremely serious. “If lifting these people’s diplomatic immunity is necessary for justice to be done in this extremely serious case, then Portugal will take steps, with the Iraqi authorities, for that immunity to be lifted,” he said.

The Iraqi embassy in Lisbon said the ambassador’s sons were acting in legitimate self-defense after being “severely beaten” and insulted by six people. It alleged the group “cursed” the diplomat’s sons because “they were Arabs and Muslims.” A police complaint was filed, the embassy said.

While the Iraqi ambassador has been summoned to Baghdad over the case, the Portuguese attorney-general’s office said in a statement, that they were working with the cooperation of the Iraqi authorities.