June 30th: Portugal hands over the Presidency of the European Council – European Union 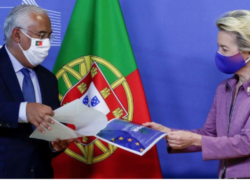 During the past six-months, Portugal has led the Presidency of the European Council, which tenure ends on June 30th . The rotating mandate will be handed over to Slovenia.

Portugal took over the Presidency of the EU Council from Germany, on January 1st, 2021, amid the COVID-19 pandemic, one of the most challenging political and economic crises in the EU’s history.

As Slovenia takes over the EU Council presidency, the post-pandemic economic recovery will be the main task of the EU in the near future.

Portugal’s achievements during its six months at the helm of the EU Council have been considered both controversial and effective.

The ending of the Trump administration coincided with Portugal presiding over the EU Council. Since then, the Portuguese presidency has been praised for contributing to strengthening the European Union’s role on the international stage while shaping the Union’s foreign policy.

For many observers and critics, one of the best achievements of the Portuguese presidency was the deal on the Tax Transparency Directive, which mandates that multinationals will have to disclose the amount of tax they pay in each EU country; that the public and tax authorities will be able to see what taxes are being paid where; and that detailed rules will prevent multinationals from abusing it.

Over the last six months, as the leader of the EU Council, Portuguese Prime Minister António Costa and his government also committed to fulfil their previously agreed agenda, in line with Portugal’s presidency motto, “Time to deliver a green recovery”.

This is the fourth time Portugal presides over the rotating six-month EU Council, since it joined the European Economic Community in 1986.