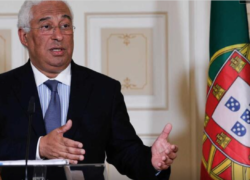 On January 1st, 2021, Portugal will officially take over the Presidency of the European Council from Germany.

This is the fourth time Portugal presides over the rotating six-month EU Council, since it joined the European Economic Community in 1986.

On Wednesday, Germany’s Chancellor Angela Merkel handed over her post to Portugal’s Prime Minister António Costa in a video message.

Addressing Angela Merkel, Prime Minister Costa praised the German Chancellor’s Presidency for the “excellent job” at the helm of the European Union.

Costa said “It’s an honor and a huge responsibility for Portugal to receive this baton from your hands and to continue your work.”

“I wish the Portuguese Presidency of the Council of the European Union every success. Germany will do everything it can to support Portugal,” she reiterated.

Costa stated that Portugal will continue the “excellent work” of the German presidency of the European Union and that the Portuguese EU Council Presidency will have “three main priorities.”

The first would be the “economic and social recovery, which will be driven by climate and digital transitions, factors of growth and the creation of more and better jobs; The second, “the development of the European Union’s social pillar, creating a solid foundation of confidence that this double transition will be an opportunity for everyone and a guarantee that no one will be left behind; and the third “staying committed to strengthening the strategic autonomy of a European Union open to the world.”

“It is now up to us to continue your work, with the motto of the Portuguese Presidency: it is time to act, for a fair, green and digital recovery,” he said.

Merkel wished Prime Minister António Costa “much success,” stressing that Germany “will do everything within its power” to support Portugal.

Merkel added that for Germany “the central challenge was undoubtedly the coronavirus pandemic,” and the importance of uniting the 27 member states in confronting this new challenge.