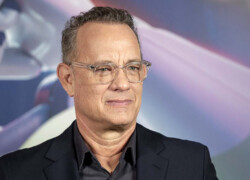 Portuguese American actor Tom Hanks will host a 90-minute “Celebrating America” primetime television special on January 20, for the inauguration of Joe Biden as President and Kamala Harris as Vice-President of the United States. The ceremony will be held on the West Front of the US Capitol.

Tom Hanks is just one of the few Portuguese Americans invited for the inaugural ceremony. Other Portuguese Americans present include the five re-elected politicians who served previous administrations. They are Jim Costa; Devin Nunes, David Valadão, Lori Loureiro Trahan, and  Patrick Toomey.

Except for Lori Loureiro Trahan, who is a Democrat congresswoman of Massachusetts, and congressman Jim Costa a Democrat of California, the other legislators of Portuguese descent are all Republicans who served under the Trump Administration not without consequence.

Rep. Lori Loureiro Trahan (D.MA.) who was among the lawmakers in Washington DC during the insurrection by a pro-Trump mob, tweeted:

“Donald Trump is directly responsible for the attack on the Capitol. He’s unfit to serve a second more as President or ever hold office again. He should resign immediately. If not, his cabinet should invoke the 25th Amendment. If they are too cowardly, Congress must impeach him.”

Rep. Jim Costa (R.CA.16), Democrat congressman of California, made headlines after he called for President Donald Trump to be removed from office, citing the unrest at the US Capitol on January 6. He released the following statement:

“The President of the United States spread lies about the outcome of a free and fair election, then urged a violent mob to descend upon our Capitol to overturn the election. He failed to uphold and defend our Constitution, directly violating his oath of office. In America, no person is above the law – not even the President. He must be held accountable for inciting an attack on the Capitol that left five people dead. Healing and unity begin with accountability. My constituents and the greater American public demand that we uphold the oath of office we take to protect and defend the Constitution against all enemies, foreign and domestic. This is a sad time in our nation’s history. I felt my vote for impeachment was the right thing to do.”

Rep. Devin Nunes (R.CA.22), Republican congressman of California, who served President Trump well, was awarded the Medal of Freedom, the Nation’s highest civilian honor. He defended President Trump in the investigation into Russia’s interference in the 2016 election. The White House said:

“Nunes had the fortitude to take on the media, the FBI, the Intelligence Community, the Democrat Party, foreign spies, and the full power of the Deep State. Devin paid a price for his courage. The media smeared him and liberal activists opened a frivolous and unjustified ethics investigation, dragging his name through the mud for eight long months.” It called Nunes “a public servant of unmatched talent, unassailable integrity, and unwavering resolve. He uncovered the greatest scandal in American history.”

Rep.  David Valadão (R. CA.21), congressman of California, was one of the 10 Republicans who joined Democrats in impeaching President Trump over his role in the assault on the US Capitol January 6. The other Republicans who voted to charge the president are Reps. John Katko of New York, Adam Kinzinger of Illinois, Fred Upton of Michigan, Jaime Herrera Beutler of Washington, Dan Newhouse of Washington, Peter Meijer of Michigan, Anthony Gonzalez of Ohio, and Tom Rice of South Carolina. He tweeted:

“Based on the facts before me, I have to go with my gut and vote my conscience. I voted to impeach President Trump. His inciting rhetoric was un-American, abhorrent, and absolutely an impeachable offense. It’s time to put country over politics.”

Sen. Patrick Toomey (R. PA) Republican of Pennsylvania, who announced on October 2020 that he would not run for reelection to a third term in 2022, has said on a recent Fox News interview that President Donald Trump should resign from office and could face “criminal liability” after the deadly insurrection at the US Capitol, becoming the second Republican senator to call for the President’s resignation.

Senator Toomey said he believes that Trump’s “behavior this week does disqualify him from serving […]. But we’ve got 10 days left, 11 days left […] I don’t know whether logistically it’s actually really even possible or practical and I’m not sure it’s desirable to attempt to force him out, what a day or two or three prior to the day on which he’s going to be finished anyway […] So I’m not clear that’s the best path forward.”

All these legislators of Portuguese heritage are members of the Portuguese American Caucus established in 1995, sponsored by 38 bipartisan congressmen, with the mission to promoting Portuguese interests at the federal level.

The presidential inaugural committee confirmed that special guests include Father Leo J. O’Donovan who will lead the invocation, firefighter Andrea Hall who will recite the Pledge of Allegiance, National Youth Poet Laureate Amanda Gorman who will read a poem, and Rev. Silvester Beaman who will give the benediction. Pop star Lady Gaga will sing the National Anthem.

The event (8:30 p.m — 10 p.m. ET) will be broadcast on many national television networks such as CBS, ABC, CNN, NBC and MSNBC, and will be streamed on YouTube, Facebook, Twitter Amazon Prime Video, Twitch and NewsNOW. FOX will also stream the event with other online platforms such as PIC’s YouTube and social media channels across America and worldwide.

Attendance at the inauguration will be limited, with members of Congress being given just one ticket because of the coronavirus. Government leaders are urging people not to come to Washington that day because of threats of violence, following the unrest events on January 6.

Outgoing President Donald Trump became the first president in U.S. history to be impeached twice. The first impeachment occurred on December 18, 2019, when the House of Representatives adopted two articles of impeachment for abuse of power and obstruction of Congress. The Senate acquitted Trump of these charges on February 5, 2020. Only one congressional Republican, Sen. Mitt Romney of Utah, joined Democrats in trying to remove the president. The second time the House of Representatives voted on January 15 to impeach President Trump for inciting violence leading up to the violence January 6.

Tom Hanks, 61, was born in Contra Costa county, California, in 1956, of Portuguese, British and Irish descent.

He was distinguished the with the Presidential Medal of Freedom, on November 2016 by President Barack Obama who bestowed especially high praise on Hanks, describing him as “America’s Dad.” The president said, “Tom has always saved his best role for real life. He is a good man, which is the best title you can have.”

Established in 1963, by President John Kennedy, the Presidential Medal of Freedom is the highest civilian award of the United States, recognizing people who have made “an especially meritorious contribution to the security or national interests of the United States, world peace, cultural or other significant public or private endeavors”.

Tom Hanks maternal ancestors were Portuguese pioneers in California with roots in the Azores.  His mother Janet Marylyn Frager (Fraga) was a hospital worker and his father Amos Mefford Hanks was an itinerant cook. Some of Tom Hanks’ Portuguese ancestral surnames include Enos, Rosa, Borges, Fraga, and Silveira.

Actor, comedian and filmmaker, Tom Hanks has won Academy Awards for performances in the movies Philadelphia and Forrest Gump, and also starred in Apollo 13 and Saving Private Ryan. Hanks has been nominated for numerous awards during his career. He won a Golden Globe Award and an Academy Award for Best Actor for his role in Philadelphia, as well as a Golden Globe, an Academy Award, a Screen Actors Guild Award, and a People’s Choice Award for Best Actor for his role in Forrest Gump. In 2004, he received the Stanley Kubrick Britannia Award for Excellence in Film from the British Academy of Film and Television Arts (BAFTA) and the Kennedy Center Honor.

Carolina Matos/editor@portuguese-american-journal.com/updated with correction: Rep. Jim Costa is a Democrat not a Republican as stated.