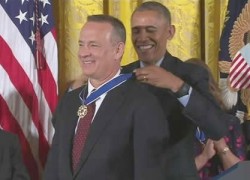 The Presidential Medal of Freedom was bestowed on 21 individuals from a varying list of categories, from science to sports to entertainment. Others honorees included Robert DeNiro, Ellen DeGeneres, Michael Jordan, Kareem Abdul-Jabbar, Diana Ross, Bill and Melinda Gates, Robert Redford and Bruce Springsteen among others.

President Obama bestowed especially high praise on Hanks, describing him as “America’s Dad.” The president said,  “Tom has always saved his best role for real life. He is a good man, which is the best title you can have.”

Tom Hanks was born in Contra Costa county, California, in 1956, of Portuguese, British and Irish descent. His maternal ancestors were Portuguese pioneers in California with roots in the Azores.  His mother Janet Marylyn Frager (Fraga) was a hospital worker and his father Amos Mefford Hanks was an itinerant cook. Some of Tom Hanks’ Portuguese ancestral surnames include Enos, Rosa, Borges, Fraga, and Silveira.

Established in 1963, by President John Kennedy, the Presidential Medal of Freedom is the highest civilian award of the United States, recognizing people who have made “an especially meritorious contribution to the security or national interests of the United States, world peace, cultural or other significant public or private endeavors”.

Tom Hanks, 60, actor, comedian and filmmaker, has won Academy Awards for performances in the movies Philadelphia and Forrest Gump, and also starred in Apollo 13 and Saving Private Ryan. Hanks has been nominated for numerous awards during his career. He won a Golden Globe Award and an Academy Award for Best Actor for his role in Philadelphia, as well as a Golden Globe, an Academy Award, a Screen Actors Guild Award, and a People’s Choice Award for Best Actor for his role in Forrest Gump. In 2004, he received the Stanley Kubrick Britannia Award for Excellence in Film from the British Academy of Film and Television Arts (BAFTA) and  the Kennedy Center Honor.