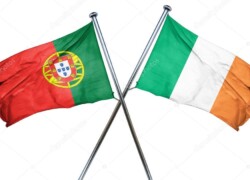 St. Patrick’s Day, March 17, is celebrated annually around the world, including, of course, by Irish expatriates in Portugal and Portuguese living in Ireland. With traditional festivities subdued this year because of the coronavirus pandemic, it’s a good time to reflect on the close ties that have long existed between these two countries.

The Irish Embassy in Lisbon points out on its website that “Portugal is close to the top of holiday destinations for Irish people, and thousands of Portuguese people call Ireland their second home from home, as do Irish people resident in Portugal.”

The latest official number of Irish visitors to Portugal was 522,000 in 2019, an increase of about 164,500 on the previous year. Pandemic permitting, substantial numbers will be able to come later this year too.

The Embassy has arranged a number of online events as well as the flood-lighting of ten imposing monuments and buildings across Portugal. It’s part of Ireland’s “Global Greening” programme.

As staunch members of the European Union, the governments in Dublin and Lisbon continue to co-operate with each other and the rest of the EU to ensure a full and sustainable recovery from the European debt crisis.

The strong bilateral economic relationship involved more than €700 million in merchandise trade in 2019. Another example of co-operation was the recent launching of a cargo ferry service between Dublin and Leixões, a major seaport near Oporto. A range of Irish firms also operate in the services  sector with 120 companies as members of the Ireland Portugal Business Network  (IPBN).

Personal and trade ties go back a very, very long way – to many hundreds of years before St. Patrick came on to the scene n the 4th century.

Historians believe that Celtic people who had migrated to the Iberian Peninsula in two big waves, around 900 BC and again 700 – 600 BC,  travelled to Ireland to join other Celts who had emigrated there from mainland Europe in the Iron Age beginning around 500 BC.

St. Patrick, an atheist in his youth, converted to Catholicism in Roman times and then set out to convert the pagans in what fifteen or sixteen centuries later would become the Republic of Ireland. Other missionaries were doing the same at about the same time in what would eventually become the Republic of Portugal. Roman Catholicism is still the predominate religion in both countries.

Much has changed since the distant past, of course, but St. Patrick’s Day is normally celebrated with vigour throughout the island of Ireland, that’s to say in Northern Ireland as well as the Republic. St. Patrick’s grave is said to be on a hillside just outside the small northern town of Downpatrick.

Their geographical position on the western edge of continental Europe encouraged trade between Ireland and Portugal to increase during medieval times. The Irish imported such commodities as wine, silver, textiles, ceramics and leather. The Portuguese imported mainly salted fish, beef, wool and timber.

Cultural and intellectual influences grew from the 16th to 18thcenturies when Irish scholars went to study at the universities in Évora, Coimbra and Lisbon. In the 18th and 19th centuries several influential Irish families settled in Portugal and descendents remain here today.

The island of Ireland is smaller with a population half that of Portugal, but a mutual feeling of friendship and respect endures nowadays with the convergence of political and diplomatic interests within the Eurozone.