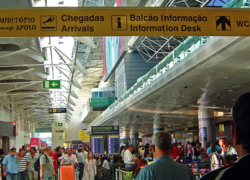 The foreign resident population in Portugal has increased for the fourth consequent year, the highest since 1976, a report by the Borders and Asylum Report (RIFA) indicates.

More than 74 thousand foreign citizens applied for Portuguese nationality in 2019, the highest value of the last five years, the report indicates.

Brazilians remain the main foreign community residing in the country, representing 25.6% of the total last year, the highest figure since 2012.

Most requests for Portuguese citizenship are related to naturalization (68.9%), followed by marriage and de facto union (13.3%) and original attribution (11%).

Asylum applications in Portugal also increased by 45.3% in 2019, reaching 1,849, the highest since 2015. The majority are single men coming from the African continent, according to the RIFA report.

The RIFA also indicates that in 2019, 183 refugee statuses were granted (286 in 2018), predominantly to nationals of Asian countries, and 113 titles of residence permit for subsidiary protection (405 in 2018) were also granted.

Portugal also remains as one of the best places in the world to invest and retire. The Portugal Golden Visa Program has seen an increase in applications in the first quarter of 2020. Accordingly, between January and April of 2020, 259 main applicants and 515 dependents received their Golden Visa residence cards from the program.

The Portugal Golden Visa is a golden visa program by the government of Portugal that grants residency in Portugal to people who invest in properties worth at least €500,000 or create 10 jobs in Portugal.

Portugal has registered the second lowest birth rate among the 28 member states of the European Union (EU), a report by Eurostat, the EU official office of statistics, has revealed. It is estimated that one third of the Portuguese population, 10.28 million (2019), resides abroad.