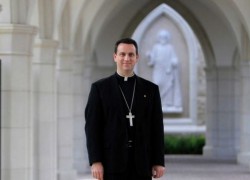 On February 2, 2016, Portuguese American Roman Catholic prelate, Steven Joseph Lopes, 40, was consecrated a Bishop in Houston, Texas, and took up his appointment as prelate of the Personal Ordinariate of the Chair of Saint Peter established by Pope Benedict XVI in 2012.

The Ordinariates were created as the Vatican’s pastoral response to repeated and persistent inquiries made by Anglican individuals and groups who desired full communion with the Catholic Church, in a history that goes back to at least Pope Pius XII.

Members of the Ordinariate are fully Roman Catholic, while retaining elements of Anglican heritage in their celebration of liturgy and in the hospitality and ministries of their Catholic communities. 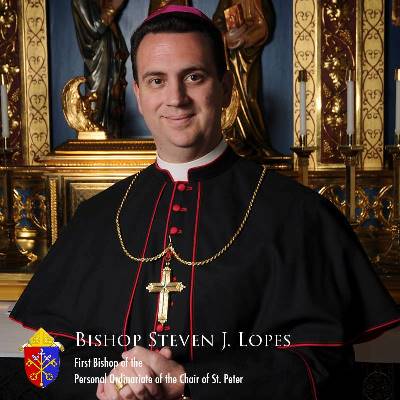 A native of Fremont, California, Bishop Lopes was born the only child of the late Dr. José de Oliveira Lopes, a native of Portugal, and Barbara Jane of Polish heritage.

His father emigrated from Portugal to the US in the early 1960s and became an American citizen in 1970. His mother was born and raised in Detroit, where much of her family still resides.

Bishop Lopes marks the first time a Roman Catholic bishop has been appointed to any of the world’s three ordinariates erected for former Anglicans. He holds a doctorate in theology from the Pontifical Gregorian University in Rome, and is currently an official of the secretariat of the Congregation for the Doctrine of the Faith.

Bishop Steven Joseph Lopes,was  ordained a priest in 2001. Pope Francis named him the Bishop of the Personal Ordinariate of the Chair of St. Peter on November 24, 2015. He succeeded Monsignor Jeffrey N. Steenson, a former Episcopal bishop appointed by Pope Benedict XVI to the position of “ordinary” in 2012.