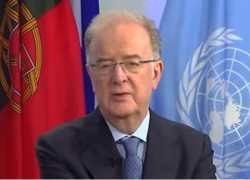 The United Nations General Assembly has honored former Portuguese President Jorge Sampaio with the first ‘UN Nelson Mandela Prize’ established last year as a tribute to Nelson Mandela, the first South Africa black president, for his legacy of reconciliation and  his role in the peaceful political transition from apartheid to democracy.

President Sampaio, 75, was cited by the UN General Assembly for his efforts as “a consistent supporter of Portuguese democracy.” Sampaio served as president from 1996 to 2006. He worked to build Portugal’s democratic and modern image while supporting European integration and overseeing the handover of Macau to China.

The prizes will be awarded at a ceremony on July 24 at the United Nations as part of annual commemorations of the life of Mandela, who died in December 2013 at the age of 95.

President Jorge Sampaio, affiliated with the Socialist Party and a lawyer by training, was the 18th President of Portugal.  In 1989, Jorge Sampaio was elected the 62nd Mayor of Lisbon, and re-elected in 1993, remaining in office until 1995.His maternal grandmother Sara Bensliman Bensaúde, who died in 1976, was of Sephardi Jewish origin.