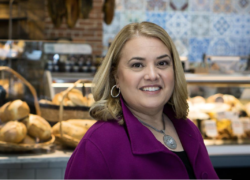 Portuguese American media personality, Maria Lawton, was nominated for an Emmy Award in the category of “Program Host/Moderator” by the Boston/New England Chapter of the National Academy of Television Arts & Sciences. The virtual awards ceremony is taking place on June 13.

Recognized for her culinary talent, Lawton is best known as the “Azorean Green Bean,” the host of “Maria’s Portuguese Table,” a culinary show broadcast on WSBE, RI PBS.

As the presenter, Lawton takes viewers on a gastronomic experience throughout traditional cookery of Portuguese food and culture in Rhode Island and the Azores.

Premiered last year, the show is currently adjourned due travel bans and social distancing. It consists of eight 30-minute episodes produced by Cineasta Digital Productions. The show has been picked up by other PBS stations, including in California and New York.

Born on the Azorean island of São Miguel, in a village called Rosário da Lagoa, Lawton moved to the United States with her family when she was six years old.

In an interview for the Portuguese American Journal, Maria Lawton revealed the origin of the “Azorean Green Bean” alias.

This name came from being picked on while going to school after my family emigrated from São Miguel. I was called many names (portugee, greenhorn, fava bean etc…) since I was different than the other children. But I never let those names hurt me or make me less than who I am. I was raised by very strong parents and grandparents, and they taught me to be very proud of who I am, so call me what you may… I knew I came from a wonderful family with an amazing heritage.  So you can call me the “Azorean Green Bean” … I wear that name with pride.

Lawton, who is also a blogger and author of “Azorean Cooking: From My Family Table to Yours,” is planning for the second season.