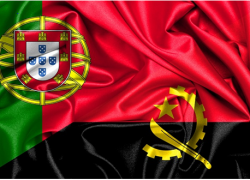 A trial is underway in Portugal that’s embarrassing the government there: a high-ranking prosecutor is accused of taking a bribe. Adding fuel to fire, some high-level demagoguery and the ghosts of colonialism have derailed a second, more important component of the trial. That stands to become a miscarriage of justice for Angolans.

Former prosecutor Orlando Figueira is on trial in Lisbon for accepting an $810,000 bribe. This is part of a bigger story, dubbed “Operation Fizz.” Manuel Vicente, the former vice president of Angola, was indicted as a co-defendant in the trial for giving Figueira the bribe to halt criminal investigations into Vicente’s Portuguese business dealings. Until, that is, Portugal capitulated to Angolan demands that Vicente’s case be separated from the trial and transferred to Angolan courts. Whether he is ultimately tried in Angola — or anywhere — remains to be seen. The proceedings started on January 22 in Lisbon, with Vicente absent from the courtroom.

Angola was a Portuguese colony for 400 years, from 1575 until 1975. The two countries have deep ties, both positive and negative, and remain bound by laws and mutual investments. Angolan elites, including generals and the daughter of former president Jose Eduardo dos Santos, have significant investments in the Portuguese banking, media and energy industries, thanks to Angola’s oil boom.

The charges against Vicente have been rocking relations with Angola. Angolan leaders have decried the accusations as racially motivated, purely political and “neo-colonial.” Vicente claims his former status as vice president grants him immunity; he would have been tried in absentia in Portugal. But regardless of whether he participates or not, the charges of bribery to cover up corrupt dealings and money laundering against Vicente are serious enough that he must face trial in a jurisdiction that respects the rule of law. The people of Angola deserve justice.

For nearly 20 years, Vicente loomed large in Angola, first as CEO of Sonangol, the state-owned oil company, from 1999 to 2012, then as Angola’s vice president, second in power to former president dos Santos, until 2017. As head of the industry that provides half of Angola’s annual Gross Domestic Product, Vicente, in fact, was probably close to dos Santos’ equal in power. When he and dos Santos were voted out of office in August of last year, Vicente slid into a comfortable seat in Angola’s parliament.

At Sonangol, Vicente oversaw the flow of billions of dollars, including the license fees that foreign oil firms paid for operating in Angola. In a 2012 report, the International Monetary Fund found there were unexplained differences between the fee amounts Sonangol received and the amounts that were transferred to Angola’s Petroleum and Finance Ministries, raising suspicions against Vicente.

During the same period, Vicente was involved in a U.S. Foreign Corrupt Practices Act investigation into Cobalt International Energy, a U.S. firm that made a big oil find in Angola. Cobalt received its Angolan exploration rights while Vicente ran Sonangol and partnered with an Angolan firm, Nazaki Oil and Gas, to drill. In 2012, the Financial Times revealed that Vicente and other senior Angolan officials held concealed stakes in Nazaki, which could have made them millions.

Nazaki eventually transferred its shares in the field to Sonangol, which earned $1.8 billion when Cobalt paid Sonangol to exit its stake. The investigations into Cobalt were closed without penalty and Vicente denied any wrongdoing.

Even before the Cobalt troubles, Vicente was involved in an Angolan bank scandal. Portugal’s Banco Espirito Santo was nearly brought down by its Angolan subsidiary, which made billions in bad loans over several years. In 2009, the parent bank sold 24 percent of its Angolan branch to another Angolan firm called Portmill, whose owners included Vicente.
Vicente is now on trial for bribing Figueira to drop corruption and money laundering charges related to the purchase of a luxury seaside apartment in a Lisbon complex known for its popularity with wealthy Angolans. Authorities launched an investigation on suspicions that Vicente bought the apartment with the help of a $245,000 subsidy from Sonangol.

In February 2016, Figueira was arrested and charged with accepting bribes from Vicente via Portuguese intermediaries in order to halt the investigations. Vicente also allegedly offered Figueira a job in a bank owned by Sonangol, which Vicente ran at the time.

Vicente’s trial has been a diplomatic headache for both countries. Angolan authorities want the case transferred from Lisbon to Luanda, saying it is an Angolan matter and should be tried under Angolan law. At a sideline meeting at the World Economic Forum in Davos, Switzerland, officials from Portugal and Angola agreed to a framework that would allow Vicente to be tried in Angola. However, Portuguese authorities fear Vicente won’t face justice in Angola because of an amnesty law that might allow him to escape punishment. When and if he actually goes on trial in Luanda is an open question.

Prominent Angolans have evaded Portuguese justice before. In 2013, Luanda threatened to cut off its lucrative ties with Portugal when it was reported that Angolan officials were being investigated for corruption in Portugal. The Portuguese foreign minister eventually apologized to Angola.

This has to end. Angola’s oil wealth can no longer buy impunity. If Manuel Vicente is innocent, he should drop his claim of immunity and face the charges in a courtroom where transparency and rule-of-law are guaranteed. Angola and Portugal deserve justice and a clear break with the past.