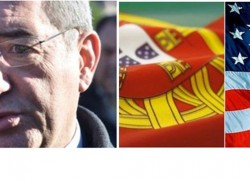 Portuguese Americans in the US are buying more products from their homeland in a bid to help it overcome its economic crisis, according to the government official responsible for liaising with Portuguese citizens abroad, Lusa reported Thursday.

At the end of a four-day visit to the US, Secretary of State for Communities, José Cesário, said he had noted the “great concern” expressed by emigrants at Portugal’s problems and their aim of contributing to fight them.

“There is a will in many communities to help, to take the initiative to help,” he told Lusa. “There’s been an enormous increase in the number of importers out here who have started acquiring Portuguese products.”

State senators of Portuguese descent he had met in Rhode Island, including the speaker, Teresa Paiva-Weed, he said, had shown “great support for the will and effort that Portugal is making to recover its finances and credibility.”

The community in the US can help both by buying Portuguese products, he said, and by trying to promote the country as a destination for tourism and investment.

“They’re the essential components for recovery, in which our communities are fundamental,” he told Lusa.

Cesário is to continue on to Canada for similar meetings with the sizeable Portuguese communities there.

In the wake of his trip, some 6,000 Portuguese textbooks are to be distributed in the two countries.