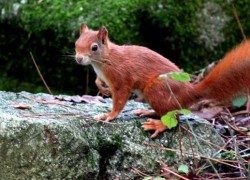 The red squirrel (Sciurus vulgaris), which had disappeared from mainland Portugal for centuries, is on its way back and there are reports of its presence in the north and center of the country, according to a biologist from Aveiro University.

The red squirrel expanded from Galicia in Spain to the north of Portugal in the 1980s, where is expanded rapidly and in 2000 it could be found all over the north of the country down to the river Douro.

“Currently, there are sightings almost as far south as the Tagus, but we don’t know exactly how far the species has got,” said biologist Rita Gomes Rocha.

The biologist, who is studying the spread of the species in the country, has launched an appeal to be advised of any sightings of the animal or remains of its presence: “if you see a squirrel, let us know, where you saw it”.

The “Red Squirrel in Portugal” project aims to “understand the expansion of the red squirrel in the country, what factors influence that expansion and its behavior patterns”, said Rita Gomes Rocha.

Previous works have shown that the red squirrel once occupied the whole of Portugal, but died out in the 16th century. The probable causes included hunting and the increased deforestation due to farming and the naval industry. As a result, red squirrels were confined to small areas and by the end of the century became extinct.