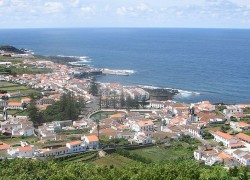 The German Berlin-based company  — Younicos  — plans to launch a test project on the Graciosa island aimed to supply its entire population with renewable resources. The objective is to replace the five diesel generators currently responsible for power supply on Graciosa.

The operation will develop a complex supply network consisting of renewable energy sources and a storage device. Younicos plans to build the world’s largest battery units (5mx4mx2,5m) powered by wind and solar power, gathered locally, to supply the island’s needs.

Currently Graciosa, the second smallest island of the Azores with a population of 4,500, relies almost entirely on imported energy.

According to a company statement, the project was planned for duration of three years and will demonstrate that power supply exclusively from renewable sources is already  possible and cost-effective.

The short term phase of the  Younicos project started in 2011 to be completed in 2012. It will supply 75 percent of the energy to the island. The long term goal behind it is to secure a sustainable energy supply from up to 100 percent renewable sources.

The Azores host some of the world’s most advanced sustainable energy systems test projects based on renewable energy resources, which include solar power, wind power, water power, geothermal and biomass power, as well as the production of energy from waves and maritime currents.

In 2009, a protocol was signed between the Regional Government of the Azores, the Foundation for Science and Technology, MIT Portugal and the University of the Azores, with a view to implementing the Green Islands Project.