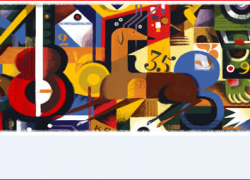 Born in 1887, he studied architecture at Superior School of Fine Arts of Lisbon before he went to Paris to study painting where he became close with artists and writers such as Gertrude Stein, Juan Gris, Amedeo Modigliani, Alexander Archipenko, Max Jacob, the couple Robert Delaunay and Sonia Delaunay, and Constantin Brâncuşi, as well as the German artist Otto Freundlich. He was also befriended by the Italian Futurists Gino Severini and Umberto Boccioni.

In 1913, Sousa Cardoso participated in two exhibitions in the United States and travelled to New York City, Boston and Chicago,

Also known as a caricaturist, his vivid style was influenced by cubism. After his death in 1918, his work remained almost unknown until 1952.

Since 1998, doodles are known as the decorative changes that are made to the Google logo to celebrate holidays, anniversaries, and the lives of famous artists and scientists. In the recent past, Google has doodled Portuguese poet Antero de Quental, the Lisbon tramcar and fado diva Amália Rodrigues.