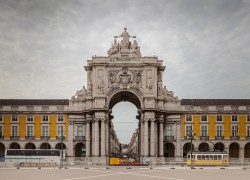 In the first three weeks of January, 2014, Portugal granted a total of 49 fast-track golden visas associated representing investments in the country of about Euro 27 million, Foreign Minister Rui Machete said on Monday.

“2014 represents another very promising year,” said Machete placing the total visa program in 2013 at 470, bringing in some Euro300 million in investments either in property or in businesses.

The Foreign Minister was at the signing ceremony for the new tourism visa protocol which will make easier for tourists from Russia, China, India, the United Arab Emirates and Colombia to enter Portugal.

The ceremony was also attended by the Economy Minister António Pires de Lima who highlighted how the protocol would redeploy technical and human resources from the national tourism institute into the services of what he termed the “economic diplomacy agenda.”

De Lima stated that while fully abiding by all the immigration and border control regulations in effect for the Schengen Area, this protocol would “enable the entering of dozens of thousands of tourists in Portugal.”

The Economy Minister remarked that there were now some 83 million Chinese tourists entering Portugal annually, the biggest spenders by nation of all visitors with “4.5% of Chinese tourists travelling to Europe and including Spain which takes 10% of this market, some 400,000 tourists.”

The Golden Visa scheme attracted little interest when it was introduced over a year ago, but is attracting applications mainly from China, Russia, Brazil, Angola, and South Africa and India. The Chinese by far are the biggest single source of demand for Portugal’s golden visas followed by citizens from Russia, Brazil, Angola.