Gold: Mining project to pay millions over the next ten years – Portugal 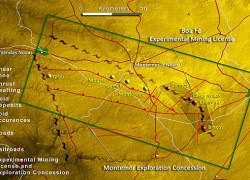 In the near future, Portugal may become a major producer of gold, Forbes online reported Tuesday. Quoted by Forbes, Nikolas Perrault, president and chief executive officer of Cold Resources Inc. (TSX-V:GTP), said that, although Portugal has been overlooked as a gold-producing country, it has got the potential in terms of a major discovery.

Colt Resources Inc.  is the Canadian based company in charge of the Montemor Gold project and the Boa Fé Gold project currently underway in Portuagl.

According to Bloomberg, cited by Forbes, previous operators at the Boa Fé project had estimated the gold resources to total about 600,000 ounces.

The Portuguese government and the Canadian gold mining exploration company signed an agreement last November to launch an experimental gold probe project in the southern Alentejo region of mainland Portugal.

The sites for the project are located at Nossa Senhora da Boa Fé and Santiago do Escoural (Montemor-o-Novo) near Évora city.

Currently, Portugal holds 382.5 tons of gold reserves, worth an estimated US$20.7 billion, one of the largest gold reserves in the European Union and the 13th highest in the world.