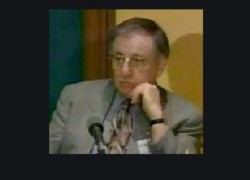 Dr. George Monteiro, Professor Emeritus of English at Brown University, passed away on Wednesday, November 6, at the age of 87.

Degrees and Honors: Professor Monteiro received a Bachelor of Arts degree in 1954 and a Doctor of Philosophy degree from Brown University in 1964. In 1956, he earned his Master of Arts from Columbia University.  He was given an honorary degree of Doctor of Humane Letters from the University of Massachusetts in 1993. In 1986, he was awarded the Order of Prince Henry the Navigator, from the Portuguese Government, for Distinguished Contributions to the Study and Dissemination of Portuguese Culture.

Bilingual in Portuguese and English he was also a poet and translator, who distinguished himself as a scholar in contemporary Portuguese literature and culture.

A life dedicated to teaching and research, he published numerous books and wrote many articles for various journals, including the Portuguese American Journal, in print and online, for which he served as first Editor-in-Chief.

In 2006, he was a professor at the University of Massachusetts and held the position of a visiting professor at Providence College in 1967-1968.

Always excelling in areas that caught his curiosity, Professor Monteiro was highly respected by all that met and got to know him for his gentleness, caring manner and inquisitive intellect.

His translations from Portuguese include, Iberian Poems by Miguel Torga; A Man Smiles at Death with Half a Face by José Rodrigues Miguéis; Self-Analysis and Thirty Other Poems by Fernando Pessoa; In Crete, with the Minotaur; Other Poems by Jorge de Sena; and Poems in Absentia & Poems from The Island and the World (Poetry by Pedro da Silveira). He has also published two collections of poems, The Coffee Exchange and Double Weaver’s Knot.

He also served as Fulbright lecturer in American Literature in Brazil–São Paulo and Bahia–Ecuador and Argentina; and as Visiting Professor in UFMG in Belo Horizonte, Brazil. In 2007, he served as Helio and Amelia Pedroso/Luso-American Foundation Professor of Portuguese, University of Massachusetts Dartmouth.

A loving family man, a mentor and best friend, he will be greatly missed. At his request there will be no public memorial services.

This developing story has been updated with corrections and additions. More…