Friends of Portugal: Evening at the Ambassador’s Residence – Washington, DC 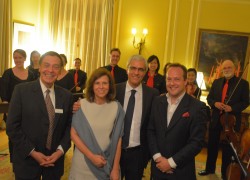 Friends of Portugal were enchanted by a splendid cultural experience through an exquisite event hosted, June 7, by H.E. Ambassador Domingos Fezas Vital and his wife Mrs. Isabel Vital. Ambassador Vital was ably assisted by Cultural Secretary Joanna Mayer Castro and staff to make the guests experience the marvelous skills of the Eclipse Chamber Orchestra (ECO) presented by the Embassy Series, founded by Jerome and Lisette Barry.

ECO Conductor Abel Pereira, born in Porto, Portugal has a distinguished musical career. Pereira displayed the mastery of skills in bringing out the best in the talented musicians deliver a stirring performance of Antonio Lucio Vivaldi Vivaldi’s “Four Seasons” and “Las Cuatro Estaciones Portenas” of Astor Pantaleon Piazzolla. Pereira let the versatile violinists shine in a remarkable and moveable way. It is no wonder that Washington Post and Fanfare magazine have praised Pereira and his orchestra’s performance as “top-notch”, “exemplary”, “superlative” and “beautifully nuanced.”

The selection of music, the elegant ambiance of one of the most beautiful diplomatic residence and a picture perfect late spring Washington weather allowed the friends of Portugal enjoy the best of Portugal’s rich cultural heritage. The joyful experience was evident from the “oohs” and the “aahs” of the eclectic audience comprising of diplomats, business leaders, scientists, academics and admirers of Portuguese culture and history.

In attendance were members of the Jones Day firm as guests of Antonio Dias, partner and Embassy Series Board Member. But as Photographer Morris Simon noted “the most cherished guest and hardly noticed was Ava Blake Shin (3 months), daughter of solo violinist Malorie Blake Shin, who perhaps is the youngest Embassy Series patron to date to attend a concert presentation.

“Visiting Portugal is an inescapable thought that came to the minds of the guests as they entered the magnificent foyer. The beautiful table in the foyer displayed many inviting cards with useful information. “Come on over to Portugal,” said one card with a leading question “Why?” It then answered with the clear reason that Portugal is the closest European country to the United States across the Atlantic Ocean. The reasons listed went on like the “Astonishing historical, cultural, architectural riches! A country with almost 900 years of history…”

Guests learned about “Azulejo” – the Portuguese word for tiles some of which decorated the lovely residence on the edge of Washington’s Rock Creek Park. “Live in Portugal,” “Invest in Portugal” and “Study in Portugal” were some of the other cards providing a list of compelling reasons to embark on a journey.

As guests veered to the left, they entered into a elegant room full of memorable pictures and precious books. H.E. Ambassador Vital was keen to share information about the beautiful country he represents so ably.

Earlier in May, 2017, the Embassy of Portugal joined the annual EU Open House Day during which more than 2,500 people had the opportunity to visit the Portuguese Chancery, featuring Roy Sewall’s photo exhibition, a display on the Community of Portuguese-Speaking Countries, which is celebrating its 20th anniversary this year and the short film ‘Portugal – Go Deeper’, which enhances some of the best touristic spots, gastronomic features and incredible sightseeing from Portugal, the US neighbor across the Atlantic. One of our best typical pastries ‘Pastéis de Nata’ were also available as well as Portuguese wine and Port Wine tasting.

With a vigorous outreach effort to educate the public about Portuguese culture the Ambassador of Portugal brought the DC Jazz Festival to the Portuguese Residence on June 3 to for a splendid concert of the Portuguese renowned pianist Mario Laginha and his musicians Bernardo Moreira, Contrabass, and Alexandre Frazão, drums.