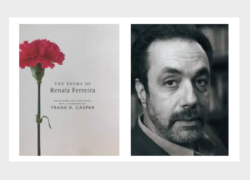 At any time, especially in the Portuguese community, there is a cause for celebration when the writer Frank X Gaspar publishes a new book, but, perhaps, even more so in the era of the Covid pandemic and social unrest. What better time to delve into a novel that takes place through the eyes of a young Frankie G sorting his way along the streets of Provincetown, Massachusetts and NYC, at the crest of the Vietnam war, and a selection of poetry, seen through the eyes of a mysterious literary muse called Renata as she traipsed through Portugal, in love and passion, amid the Carnation Revolution?

Born and raised in the Portuguese West End of Provincetown, Gaspar graduated from the MFA program at the University of California at Irvine, and is the author two novels, and six volumes of poetry: Night of a Thousand Blossoms, A Field Guide to the Heavens, Mass for the Grace of a Happy Death, The Holyoke, Late Rapturous along with his most recent book, The Poems of Renata Ferreira, boasting a strong sense of fiction, poetry and archival history with the all-knowing viewpoint of the wisdom of the past.

In a recent conversation with poet Millicent Borges Accardi, Gaspar discusses his writing and the elusive character of Renata Ferreira, the protagonist-hero-poet of his latest book The Poems of Renata Ferreira (2020).

Q: The Poems of Renata Ferreira, a fascinating hybrid between a fictional narrative and translated poetry, is divided into sections with completely different purposes. The first section is devoted to a coming of age story of a young man called “Frank” (based on the author himself, Frank Gaspar) in Provincetown, in the 1970s, when the world seems to be a free for all, especially for the young and adventurous in a declining fishing town, among a cast of colorful characters. How did you decide which people to include?

A: That’s a good question.  It throws me back on the process.  I’d have to say that I didn’t decide so much as accept. If someone appeared, it always seemed for a reason. Allen Ginsberg once said, “Vividness is self-selecting.”  I think that’s what happened. Those who needed to be there just walked in.  I was grateful that they did.

Q: Can you speak to a little about your process for “conjuring” the poet and revolutionary Renata?  Do you go into a trance or light a candle?  What are the elements that meet or join in the universe to allow/cause/inspire/encourage her to speak through you?

A: No, I did not ever conjure Renata. I did not invent her. There was no trance or incense or wonderful drugs.  I was on my back porch one fall day working on a novel, and suddenly I typed out a poem. It was weird. It was not mine, and it contained references that I was familiar with, but only marginally so. I shrugged it off. I had been working hard.  But it happened again. And then again. Poems that I did not write, but that were “dictated” to me in my head. They came all in one piece. Bang. No work on them or fiddling. Just getting them down.

There were occasions where I was otherwise occupied driving, especially, when a poem would come, and I couldn’t take it down. Too bad, no second chances with this woman. She came when she came, and that was that. I never knew when it might be or even if it might happen again.

Q: How do you interview someone who does not exist? I mean, after reading the book, I am a little mystified as to whether Renata existed or whether she is a ghost or fantasy.

A: I’m sure if Fernando Pessoa were here, he’d give us some pointers!

Q: What do you think is the difference between heteronyms (for which Pessoa is famous) and persona poems?

A: A persona poem is a poem written as spoken or written by a character (or in many cases an historical figure). A heteronym is a person not created for the purpose of a single poem or group of poems.  Whereas the persona poem is almost always claimed by the actual writer, the writer of the heteronym is a separate entity from the poet. She may even write reviews of poetry, including the poet whose heteronym it is. Heteronyms have separate lives and are complete beings, though they live through or inside of the host.

José  Saramago wrote the magnificent The Death of Ricardo Reis, one of Pessoa’s heteronyms who survived Pessoa’s death. Saramago was smart enough to realize this forty-nine year after Pessoa’s passing. Saramago brought Ricardo back to Lisbon, and the world read about it, and won a Nobel prize.

Q: Your book The Poems of Renata Ferreira is dedicated, in part, to the poet and long-time Provincetown resident Mary Oliver, what similarities are there between Renata’s and Mary Oliver’s work?

A: I don’t see similarity in their poetry except for the full-faced direct effect each of them achieves with voice (vastly different voices, of course—but direct, high-impact).  When I was living in the mansion (mentioned above) in Macon, I was only about eight hours away from Mary, by car, and I am an inspired driver (and my time at Mercer was to write, with only one afternoon seminar a week), so I spent a lot of time with her down in Hobe Sound, Florida.

She was very high on Renata and always asked about her. She suggested many times that I write back to her, but I couldn’t do it. I might have worried about disrupting the poems, the dictations—or I might have worried about encountering her in a way that was less intense than receiving the poems.  Now that the book is out (well, due to Covid sequester, it is out nowhere, and travel and reading venues are not available—the press had many events planned on both coasts and in Portugal, but the times are what they are) I don’t feel the same compunctions, and I might attempt to engage her further. I’m not sure. There is that trove of material….

Q: In the book, you tell us a lot about Renata: How do you interview someone who does not exist?  Renata was a poet, and we can only know her through her poetry, the typewriter, and the memories she left with those who knew her— In writing the book, what input did you use?

A: It’s odd, but in receiving the poems and thinking about her—not thinking so much as seeing and hearing her in my ruminations—I came to know things.  Perhaps “know” is too strong. Intimations, glimpses, imagined conversations (imagined by me, not dictated by her; she only dictated poems) that I’d hold with her in the way one might talk with a lover who is not there, or a friend, or even a stranger.  She is as real to me as anyone I know. She is just real in a different way.

Q: Did you reach out to others who knew Renata?

A: I had a notion at some point of reaching out to some Provincetown friends who were around in those paradisiacal early years of the “sixties—the few kids who, like Frankie G, were influenced by the artists and bohemians—but I never did.  I mean, we few all knew our own Renatas (or Renatos) and were influenced by their artistic, sexual, and intellectual lives, as far as we could divine them given our benighted upbringings. It would have been collaborative, somehow. The process just took another direction.

Q: The Los Angeles artist F. Scott Hess’s exhibition “The Paternal Suit” consists of over 100 paintings, prints, and objects created by Hess, but presented as artifacts, examining the impact of history and perceived “truths.”  Have you considered presenting Renata’s poems, the typewriter, astrological chart and other artifacts as a show, perhaps in Provincetown?

A: Oh, yes. Definitely! There are more things in the fish box.  And I don’t know what Ana Bento Lewis will release, once provenance is determined.

Q: Do you still have your typewriter, the one Renata left you? 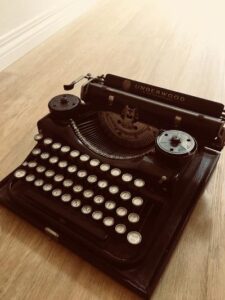 A: Yes!!  I am answering your questions in its typeface!

Q: Are there blanks you wish you could fill in?

Q: On a lighter note? If you were casting the movie of Renata, what actress would you choose to play her? “Tall and dark, with curly black hair, cut very short and she wore blue jeans and blue chambray work shirts and smoked Camels. . .”

A: I don’t know enough about actresses to answer. I think my favorite actress in my favorite role is Ava Gardner in Tennessee Williams’s best play, Night of the Iguana, but she is rather more curvy than Renata—though for some reason she reminds me of her.  Her sexual appetite, certainly.  Yes, perhaps a younger Ava Gardner with shorter hair and darker skin.

Frank X. Gaspar’s writing has received grants from the National Endowment for the Arts and the California Arts Council and his published work has won multiple book prizes: Anhinga, Morse, Brittingham, along with inclusions in the notable Best American Poetry anthologies and four Pushcart Prizes. His first novel Leaving Pico, a coming of age story of a young, second generation Portuguese immigrant boy, was a Barnes and Noble Discovery Prize winner and his second novel Stealing Fatimah, the tale about a priest’s search for redemption, was the MassBook of the Year.

Gaspar’s poetry has appeared in The Nation, Kenyon Review, Georgia Review, Prairie Schooner, Tampa Review and many other fine literary journals. He currently teaches fiction in the low-residency MFA program of Pacifica University, after retiring from Long Beach City College (in California).

Millicent Borges Accardi is the author of two full-length poetry collections, most recently, Only More So (Salmon Poetry 2016).  She has received fellowships from the National Endowment for the Arts, Fulbright, CantoMundo, California Arts Council, Barbara Deming, Fundação Luso-Americana (FLAD..  She has published over 50 reviews and interviews in Portuguese American Journal, Poets Quarterly and AWP Writers’ Chronicle. Find her @TopangaHippie (Twitter and IG).