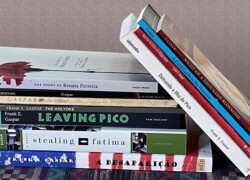 Renata Ferreira’s poems were composed in the final years of Portugal’s fascist regime, exposing and subverting the government’s draconian edicts against women’s rights, sexual freedoms, political dissent, and progressive thought. While she worked in the resistance as a clandestine writer, passing hand-typed bulletins and banned literature throughout Lisbon, her poetry is unmistakably ardent, tender, fraught, erotic, and Sapphic. Presenting the poems of this Portuguese­ American writer and detailing their surprising rediscovery in 2015, Frank X. Gaspar fuses genres, flouts borders, and brings to life a voice that had been silenced by history and happenstance. As his inventive narrative unfolds, Ferreira emerges, whole and mysterious, offering up her history, her passions, and her art.

Frank X. Gaspar was born and raised in Provincetown, Massachusetts. The author of five collections of poetry and two novels, his debut novel, Leaving Pico, was a Barnes and Noble Discovery Prize winner, a recipient of the California Book Award for First Fiction, and a New York Times Notable Book. His second novel, Stealing Fatima, was a MassBook of the Year in Fiction (Massachusetts Center for the Book).

“A fascinating saga weaving desire and memory, war and beauty, lies, truth, and the persistence of art. Fernando Pessoa and Jose Saramago are certainly among Gaspar’s kindred writers, but I’m also reminded of Lawrence Durrell’s The Alexandria Quartet—I feel that same total immersion. I’m swept away. The Poems of Renata Ferreira is gorgeous and witty, wildly smart—even the end notes are pure poetry!”—Ellen Bass

“In his unique fashion, Frank X. Gaspar draws the margins of Atlantic culture closer, as the waters of Salazar’s politics and the Carnation Revolution flow onto the shores of the Portuguese community of Provincetown and flow on again to Bohemian New York. Along with the foreword and poems, a welter of notes extends the fictional romp with riddles of identity, history, myth, and the untraveled territories of the mind. The Poems of Renata Ferreira is vintage Gaspar—a deft and intriguing performance.”—Teresa Alves

“There are poems pulled from a well, others dropped from the sky. What fortune that Frank X. Gaspar was there with his basket to catch the poems of Renata Ferreira, work that through his fingers emerges as a meditation on eros as resistance, the dangers of country, and the ghost hand of artistic influence. A love story, an animal howl, The Poems of Renata Ferreira is a song of saudade that I never wanted to end.”—Lindsay Whalen

“Frank Gaspar is a wonderfully gifted author who—luckily for us—happens to be Portuguese-American. Renata’s poems remind me of the passion and outrage of Novas Cartas Portuguesas by the Three Marias. Like Novas Cartas, this is also a book that subverts genre, composed at it is (seamlessly) of memoir, fiction, essay, notes, and, of course, Renata’s poetry. The result is a remarkable book that is sure to keep readers and critics entertained for many years to come.”—Antonio Ladeira