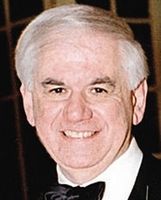 Born in Fall River, he was the son of the late Frank B. and Herminia “Minnie” (Medeiros) Sousa. Loving father of, Frank B. Sousa, III (wife-Jennifer); doting grandfather of Eleanor and Jacqueline; brother of Barbara Vincent (husband-John), Patricia Sousa and the late Robert B. Sousa.

He also leaves several nieces and nephews. Frank attended Coyle-Cassidy High School from 1959-1963 and graduated from Boston College with an Accounting degree in 1967. Mr. Sousa started with Colonial Wholesale Beverage in 1963, and in 1968 entered in the position of accounting and finance.

In 1983, he became the President and continued the time honored philosophy of his father, and the extraordinary insight to nurture and grow the business. Frank’s passions include the participation in the beer business having served on the Executive boards of both the State and National Beer Wholesalers Organizations. He served on the board of the University of Massachusetts Dartmouth, UMass Foundation and Family Business Center at UMass.

Frank was an intricate part in the development of the Portuguese American Archives. In 2000, Frank was given an honorary Doctorate Degree in Business by the University. Within the Community-at-large he served as a Treasurer of the B.C.C.V.B., Trustee for the Teamsters Local Welfare Fund and was active with the United Way of Fall River.

In lieu of flowers, donations can be made to the University of Massachusetts Foundation for Frank B. Sousa Jr. Memorial Fund, 285 Old Westport Rd., Dartmouth, MA 02747.