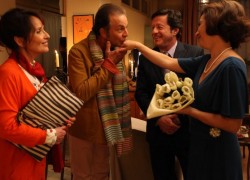 The film “The Gilded Cage,” a French-Portuguese production, will be screened at the 17th Cinéfranco Francophone International Film Festival taking place, from March 28 to April 6, in Toronto, Canada.

Established in 1997, Cinéfranco is the most important International Francophone Film Festival in English Canada dedicated to promoting the diversity and richness of Francophone movies with the goal to increase their appreciation and give them more exposure in an English speaking environment. All films are screened in their original language with English subtitles.

Produced in 2013 in France and title in French  “La Cage Dorée,” the film will be presented in French with English subtitles, on April 4 at 6:pm, at the Royal Cinema, located  at 608 College Street, Toronto.