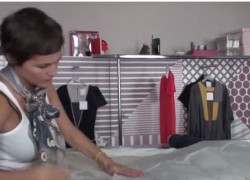 Portuguese fashion designer Katty Xiomara is returning to New York to present her 2014/15 Winter Collection at the fashion week scheduled for February 6-13.

She will be a presenter  at Pier 59 Studios as part of the “Nolcha Fashion Week” dedicated to independent fashion designers. The New York Fashion Week kicks off  February 6 through February 13.

Katty Xiomara, who works out of Porto, Portugal, first premiered her collections in New York on September of last year.

Her designer clothes are on sale in various stores in the United States, mostly in New York City and Miami and other countries including Spain, Kuwait and the Dominican Republic.

Katty Xiomara Santos Anjos, 40, was born in Venezuela to Portuguese immigrant parents. She returned to Portugal at age 18, settling in Porto where she studied fashion design at the CITEX (Centro de Formação Profissional da Indústria Têxtil).

Her professional career began in 1996 when, at age 22, after she won first prize at the “Porto de Moda” competition. In the same year, she presented her first collection at Portugal Fashion.

In 2001 she signed a contract with TRL, to create, produce and market swim wear, casual wear and fitness wear under the Xiomara brand name. She has also designed uniforms for Pizza Hut, Kodak and McDonald’s. paj.staff