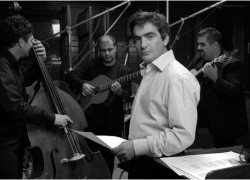 Portuguese fado singer Camané, one of the most prominent and established fado artists of his generation, will perform this weekend for two dates in New Bedford, Massachusetts.

Camané is a fourth generation singer who, at the age of 47, has already been performing for more than 25 years. He has released a steady stream of recordings (all on the EMI label) over the last 18 years, and has toured extensively both nationally and worldwide.

According to the fadista, while his repertory and personal tastes have changed over the years,  his latest CD—a ‘best of’ collection entitled “O Melhor 1995-2013”—captures many of the high points of his earlier recordings.

As Camané recently stated, “When the fado is performed with true emotion, it overcomes all possible linguistic barriers.”

Camané’s earliest exposure to the fado was as a young boy, hearing the music of his grandfather. Later, he sang extensively in fado houses throughout Lisbon, including O Faia, Senhor Vinho and the Adega Machado.

His work in the theatre, particularly in plays directed by Felipe La Féria, led directly to his first CD on EMI, “Uma Noite de Fados,” in 1995. Between then and now, he has released another ten CDs, including numerous live recordings.

This weekend’s events are notable because they present an opportunity to hear Camané in two very different settings. He will appear at the more intimate Cotali Mar restaurant, where the event’s proceeds will benefit the Zeiterion Theatre, as well as at the Zeiterion itself – a location that has established itself as one of the principal larger venues for fado performances in the US.

Joining Camané for both shows are José Manuel Neto on the Portuguese guitar, Carlos Manuel Proença on the viola do fado, and Paulo Paz on the contrabass: all storied musicians who, like Camané, have recorded and performed extensively, both within and outside Portugal.