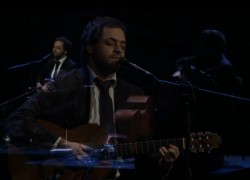 ♦ António Zambujo is in the United States for a brief tour to promote his fifth record, “Quinto”, representing the continuation of his evolution from singer of the Canto Alentejano, to a musician (clarinet, viola do fado) and singer of fado.

Tonight (May 9) he is performing in Cambridge, MA, at the Regattabar; followed by a stop at the Atlantic House in Naragansett (May 10), RI, and, finally, at the World Music Institute in New York City, May 12. He then returns to Portugal and Europe for a long series of concerts.

This is only his second visit to the US, and his first to the East Coast. This a rare opportunity to hear an artist who has achieved wide praise for his singing and his musicianship, both in and out of the fado.

In an brief interview for the PAJ, Zambujo discussed his wide-ranging body of work. He said that his initial musical influences were first the traditional music of the Alentejo (where he was born) and then the fado.  After a period in the conservatory studying the clarinet, he came to Lisbon to take a role in the musical, Amália, where he played Amália Rodrigues’ first husband, Francisco Cruz.

The production was an astounding success, lasting nearly four years through one thousand performances. He says that his participation in the musical did not contribute to his music, but rather to his ability to perform from a stage and to communicate intimately with large audiences. Most importantly, however, his work in the theatre brought him to Lisbon. The city, he says, presented a “new reality, one completely different from what I had experienced in the Alentejo.”

It was during this time that Zambujo came to know the fado through the fado houses, poets and musicians of the city. This period of intense contact with the city and the fado led directly to his first record, “O Mesmo Fado,” released in 2002 two years after his arrival. According to Zambujo, his four subsequent records represent a musical progression that draws upon and extends his musical and personal experiences.

Indeed, Zambujo’s recordings are notable for their attention to the lyrical and musical evolution of the fado — a stance that has sometimes drawn criticism from fado purists. I asked Zambujo, who until December 2011 performed at Sr. Vinho in Lisbon, if he felt it was true that he was no less a fadista for performing other musics. He responded that his view of music, both as a listener and performer, is broad–and that he is of course influenced by all that he hears and sees.

The latest record, “Quinto,” is comprised of all original lyrics, and brings together the five musical styles that are the greatest reference for Zambujo: traditional Portuguese music, fado, jazz, brazilian music and African music, particularly the morna of Cape Verde.

Indeed, according to Zambujo, “We become a reflection of what we hear.” He first encountered Brazilian music through João Gilberto, and jazz through Chet Baker. Speaking of his evolving repertoire, he says “The fado remains. The only difference is that it is no longer alone” (“O fado continua lá. A única diferença é que já não está sozinha.”)

His band for this tour mirrors his broad musical taste: Luís Guerreiro on the guitarra portuguesa, himself on the viola do fado, Ricardo Cruz on the contrabaixo, and John Luz on the cavaquinho. The only missing ingredient from the quintet setup featured on “Quinto” is the clarinetist (curiously, also the instrument in which Zambujo first trained as a musician). The dominant theme of the lyrics for this record, as with his others, is love.

Those with Azorean roots will hear in the music of the Canto Alentejo something similar to the folkloric music found on certain islands. Zambujo has visited all the islands but two, and says that the music of the Azores is “among the most beautiful that he knows.”

António Zambujo is performing tonight (May 9) in Cambridge, MA, at the Regattabar; tomorrow (May 10) Naragansett, RI at the Atlantic House; and Saturday (May 12) in New York City at the World Music Institute.”