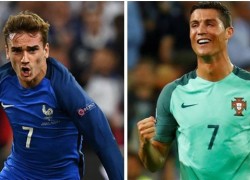 Portugal’s team is hoping to win the game of their lives on Sunday’s Euro 2016 final against hosts France. Portugal have lost last 10 matches between the two teams. The French have won the last two major tournaments they have hosted.

Indeed, the Portuguese national team has suffered 10 straight losses against France including the Euro 2000 semi-finals and in the last four of the 2006 World Cup.

This would be the first time Portugal would win the international title, 12 years after losing 1-0 at home, to Greece, in their only major final. At the time, Cristiano Ronaldo was only 18 years old. This match will be his second European Championship final.

Currently Ronaldo (7) plays forward for Spanish club Real Madrid and the Portugal national team and serves as captain for Portugal.

Ronaldo is the perfect counterpart for French footballer Antoine Griezmann (7) who scored both goals as France beat Germany to reach final on Thursday night.

Currently Griezmann plays for Spanish club Atlético Madrid and the France national team as a forward.

Thousands of Portuguese fans are expected to attend the event, among them the President of Portugal, Marcelo Rebelo de Sousa, and the Prime Minister António Costa. The Portuguese community in France, estimated at over one million, is one of the largest Portuguese immigrant communities in Europe.

The Euro 2016 final will be played in the Stade de France, in Paris, on Sunday evening (3pm EST/USA).