ETAN: 10 Years After East Timor’s Independence – Where Is the Justice? 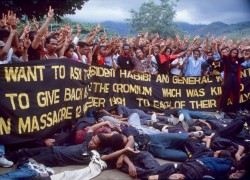 The East Timor and Indonesia Action Network (ETAN) congratulated the people of Timor-Leste as they prepared to celebrate the 10th anniversary of the restoration of their country’s independence on May 20.

“This important milestone is the result of the persistent struggle and great suffering of the people of Timor-Leste,” said ETAN’s National Coordinator John M. Miller. “ETAN is proud to have played our part in supporting Timor’s self-determination and now independence.”

“The nation faces many challenges. With independence, its people are in a position to decide its future rather then have Indonesia impose its will on them,” he added.

Timor’s independence was prevented for nearly 25 years by the U.S. and other governments’ support for Indonesia’s illegal invasion and occupation. Yet, no senior officials of any country have been held accountable for the horrific human right violations and war crimes that took place.

“The U.S., other governments and the United Nations must commit themselves to achieve justice for the victims and their families.” said Miller. “ETAN will not rest until justice is done.”

“Human rights violators from elsewhere have been prosecuted, often long after their crimes were committed. But Indonesia and others continue to obstruct holding accountable those who facilitated and carried out crimes during the occupation,” he added.

“Ongoing impunity for the systematic Indonesian military and police crimes prevents the people of Timor-Leste and Indonesia from consolidating their democracies and moving on with their lives. While Timor-Leste is now independent, its people will not be able to overcome their tragic past without justice for what was done to them and their families,” said Miller.

Neither Congress nor the administrations of George W. Bush and Barack Obama have responded to the recommendations of Timor-Leste’s Commission for Truth, Reception and Reconciliation, although many of them are directly addressed to the U.S. and other governments. These include the Commission’s call for an international tribunal to try perpetrators of crimes against humanity during the Indonesian occupation, reparations from Indonesia and other countries that supported the occupation, and restrictions on foreign assistance to the Indonesian military.

“The U.S. and others should press President Susilo Bambang Yudhoyono to immediately release all information that can help identify and locate those who were disappeared during the occupation,” said Miller.

The recent conviction of former Liberian President Charles Taylor for his support of rights violators in Sierra Leone should sound a note of caution for members of the Obama and former US administrations. This ruling provides a precedent for prosecuting those who arm, train and politically support those who commit the worst abuses, even if they do not directly organize or carry them out.

“The Obama administration should restrict U.S. military assistance to Indonesia until the Indonesian generals and political leaders who organized and directed numerous crimes against humanity during the 24-years of illegal occupation are credibly tried,” Miller added. Instead, the Obama administration is considering the sale of deadly Apache attack helicopters to the Indonesian military.

As detailed in declassified documents released by the National Security Archive and elsewhere, on December 6, 1975, then-U.S. President Ford and Secretary of State Kissinger gave Indonesian dictator Suharto a green light to invade East Timor, which his military did the next day. The U.S. supplied 90 percent of the weapons used during the invasion. From Ford to President Clinton, successive U.S. administrations consistently backed Indonesia’s occupation, providing Jakarta diplomatic cover and billions of dollars in weaponry, military training, and economic assistance.

During more than two decades of occupation of Timor-Leste, Indonesian soldiers committed serious crimes with impunity, taking as many as 184,000 Timorese lives and torturing, raping and displacing countless others. Timor-Leste became independent in 2002.

Timor-Leste’s Commission for Reception, Truth and Reconciliation researched and documented the nation’s experiences during the occupation. The Commission’s comprehensive 2,500-page report recommended establishment of an international criminal tribunal and also advocated that countries (including the U.S.) which backed the occupation and corporations which sold weapons to Indonesia during that period should pay reparations to victims. The Commission urged the international community not to support Indonesia’s military until it was thoroughly reformed and respectful of human rights.

The UN-supported serious crimes process filed a number of indictments of a number of Indonesian officials and East Timorese militia leaders for crimes against humanity committed during the referendum on independence in 1999.

ETAN was formed in reaction to the 1991 Santa Cruz massacre, when hundreds of peaceful demonstrators were gunned down by Indonesian troops carrying U.S.-supplied weapons. On May 20, ETAN members will be honored by the Timorese government with the Laran Luak medal for its contribution to the liberation of Timor-Leste. The U.S.-based organization, which celebrated its 20th anniversary last December 10, advocates for democracy, justice and human rights for Timor-Leste and Indonesia.

Read about ETAN’s 20 years of work for for human rights, justice and democracy: http://etan.org/etan/20anniv/default.htm .