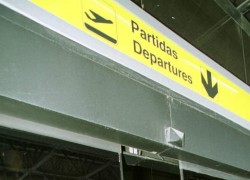 More people registered as unemployed at Portugal’s job centers have signed off in the first nine months of 2012, because they were leaving the country. The number was up more than 45% from a year earlier, official figures revealed.

According to statistics from the Institute of Employment and Professional Training (IEFP), 24,689 people cancelled their registration because they were emigrating, against 16,977 in the first nine months of 2011.

The revelation comes after the announcement earlier this week that the jobless rate in September fell by a tenth of a percentage point, to 15.7%.

That prompted opposition politicians and union leaders to suggest that ever more youngsters had given up hope of finding employment in Portugal and were instead seeking work abroad.

According to the just approved government budget for 2013, unemployment has been projected to rise further to 16.4 percent next year.

Last year, Portuguese Prime Minister Pedro Passos Coelho has said that the best solution to youth unemployment was to emigrate. He suggested they go to places such as the Portuguese former colonies of Angola and Brazil.