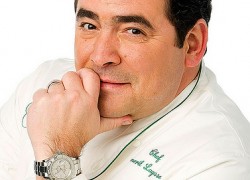 In addition to “Emeril’s Italian Table,” “Emeril’s Chop House” and “Burgers And More by Emeril”  Lagasse owns several other restaurants at Las Vegas Sands properties, including “Delmonico Steakhouse” at The Venetian Hotel and “Table 10” at The Palazzo. he also owns a casual New Orleans eatery with a menu that emphasizes market fresh ingredients.

Sports themed “Lagasse’s Stadium,” restaurant – also at The Palazzo –  is considered by many one of the top bars in Las Vegas.

Emeril Lagasse was born October 15, 1959, in the small town of Fall River, Massachusetts, where he was raised by his French-Canadian father, Emeril Jr., and his Portuguese mother Hilda.