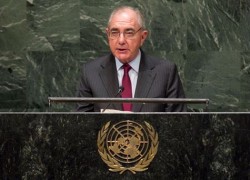 Portugal had presented its candidature to the Human Rights Council (HRC) for the term 2015-2017 in January 2011.

Speaking before the 69th General Assembly, Portuguese Minister of Foreign Affairs,Rui Machete, stated that if elected Portugal would “engage in the work of the Human Rights Council fully committed to a strong, independent and effective multilateral human rights system.”

Reiterating Portugal’s commitment to work with the Council to achieve global peace and justice, Machete said, “Portugal is strongly committed to the definition of this new agenda” and that “a transformative new global partnership which mainstreams human rights and combats inequalities” is needed to “promote peaceful, stable and just societies, advancing also the important issues of population and development.”

Membership is based on equitable geographical distribution. The five regional groups include Africa, Asia-Pacific, Latin America and the Caribbean, Western Europe and Eastern Europe.

Created by the General Assembly in 2006 to address human rights violations, the Human Rights Council is composed of 47 Member States.

The Human Rights Council is the main United Nations intergovernmental body responsible for promoting and protecting all human rights and fundamental freedom. It was established by the General Assembly in 2006 to replace the 60-year-old UN Commission on Human Rights.

Source: Permanent Mission of Portugal to the United Nations