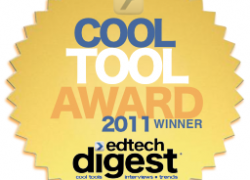 The Portuguese multinational OutSystems picked up a “Cool Tool Award” from the American publication EdTech Digest, in the Green Solution category, the company announced Tuesday.

Provider of the industry leading Agile Platform application development environment, OutSystems received the award for an energy management application delivered at the University of Aveiro in concert with their implementation partner Contisystems.

The University was looking for a way to improve energy consumption across campus buildings and create a centralized location for management of energy consuming devices.

The application is based upon the Agile Platform, a program that is now up and running at over 20 thousand companies in 22 different sectors of activity.

OutSystems recently signed up its largest client ever, the United States Army, which joins companies including Bacardi, Barclays, TNT, E.ON, fly.com and Siemens.

According to OutSystemst, the ‘Cool Tool Awards’ recognizes companies who “made the greatest contribution towards education in the 21 century through innovation and the usage of technology.”

Founded in Portugal in 2001, OutSystems is a multinational software company which operates in the agile software development market. The company’s mission is to provide technology that speeds up and reduces the costs of the delivery and management of web business applications using agile methodologies. OutSystems is heaquarted in Linda-aVelha (Portugal), San Ramon, CA (USA), and Maarssen ( Netherlands).