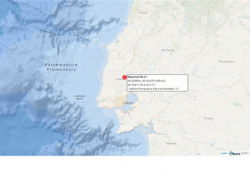 The Portuguese Institute of the Sea and Atmosphere (IMPA) has confirmed the occurrence an earthquake measuring 4.3 on the Richter scale, registered at 7.44am this morning.

The tremor, which struck Sobral de Monte Agraco, 26 miles north-west of Lisbon, lasted about 10 seconds and did not cause any injuries or damage.

The earthquake was felt mostly in the District of Lisbon (population 2,048,200).

A spokesman for IMPA reassured: “This earthquake, according to the information available to date, caused no personal or material damages.”

According to the European-Mediterranean Seismological Centre (EMSC), the population which felt the quake is estimated at 3.5million.