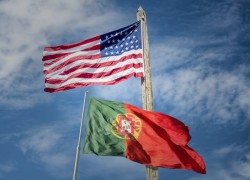 The President of Portugal, Marcelo Rebelo de Sousa, announced in Boston (MA) he will travel to Washington later this month for a meeting with US President Donald Trump, The visit is scheduled for June 27, sources told the Portuguese American Journal.

In Boston, the President Rebelo de Sousa was praising the “pride” of country expressed by the Portuguese resident communities and that he would transmit that sense of pride to President Donald Trump.

The President of Portugal remarked, “He [President Trump] may well thank the Portuguese, because our community, which works for the future of the United States, is honest, hardworking, competent and honored by Portugal. They love the United States and don’t forget our homeland, our beloved Portugal. ”

She said the visit will mark “the culmination of a month-long celebration of the Portuguese-American community” and celebrate the close bond between the countries.

Sanders noted Portugal is an important NATO ally and partner in Afghanistan and added the meeting will focus on “strengthening the countries’ cooperation in addressing global conflicts and promoting economic prosperity, among other topics.”

Statement by the Press Secretary on the Visit of President Marcelo Rebelo de Sousa of Portugal:

On June 27, 2018, President Donald J. Trump will welcome President Rebelo de Sousa of Portugal to the White House.  The visit will mark the culmination of a month-long celebration of the Portuguese-American community and the close bond between the United States and Portugal.  Portugal is an important NATO Ally and a partner in Afghanistan and the crisis regions of Africa.  It has also joined in pressuring North Korea.  Together, the United States and Portugal will look to deepen cooperation in addressing global conflicts, promoting economic prosperity, and strengthening energy security.  The two leaders will meet for a private conversation, followed by an expanded bilateral meeting. 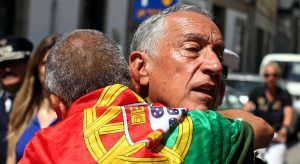 President of Portugal greeting the community.(Photo/RTP)

President Rebelo de Sousa also announced he will return to the United States in November to visit more Portuguese communities. He said he was aware that some Portuguese resident communities were sadden because he couldn’t visit them at this time.

The President of Portugal visited Boston on June 10 for the celebrations of the 10th of June (Day of Portugal). He was accompanied by Prime Minister António Costa, the Minister of Foreign Affairs Augusto Santos and Vasco Cordeiro the President of the Government of the Azores. In Providence (RI), on June 10, the President Rebelo the Sousa wwas honored by the resident Portuguese American community with a dinner at the Capital Grille Restaurant, partaking as guest of honor in the “Water Fire and Portuguese Street Festival” at the Water Place Park. On June 11, additional events in Boston included the 34th annual Heritage Day of Portugal, honoring the President of Portugal at the Massachusetts State House. The ceremony, sponsored by the Portuguese American Legislative Caucus, also feature the presentation of the Heritage Day of Portugal awards to Massachusetts Portuguese-American individuals who have served as leaders in their respective communities.